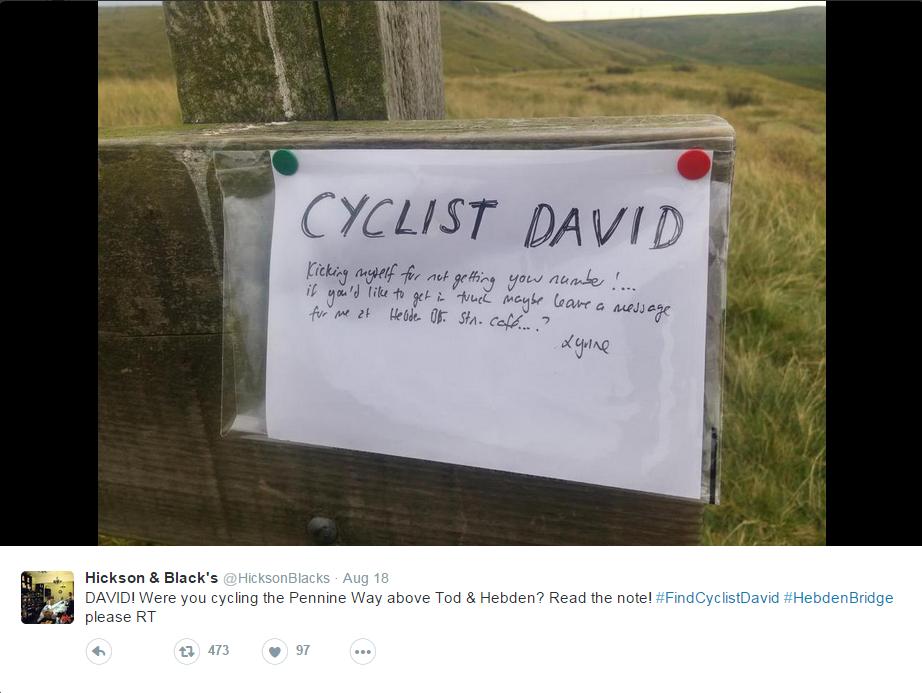 The internet responds to one woman's 'missed connection' note, found on a fence on the Pennine Way...
by Laura Laker

Hundreds of people are trying to help a woman find love after a note was left on the Pennine Way for a man she calls Cyclist David.

The note, signed Lynne, written on A4 paper and pinned to a fence in a plastic wallet, was discovered near Hebden by local delicatessen owners who photographed it and shared on their Twitter account on Tuesday.

Hickson & Blacks' tweet has been retweeted more than 450 times and favourited 100 times since, while the hashtag #findcyclistdavid is making the rounds.

The note reads: "Kicking myself for not getting your number! If you'd like to get in touch maybe leave a message for me at the Hebden Bridge Station Cafe...?" Lynne

It has been received with a mix of hope, ridicule and cynicism. Some believe they know David, some suggest tracking him down via Strava, while some wonder if David is actually married.

It is unclear whether Lynne is a cyclist but Hebden Bridge Station Cafe is a popular haunt for cyclists riding the Pennines Way.

Either way, it seems to have caught the imagination of the internet. One user suggested the notes idea could take off and the area renamed after a popular dating website.

One or two are less impressed, not least with her handwriting.

Some mock her methods

Those more romantically inclined, though, are rooting for Lynne to meet her David (even if their grasp of Shakespeare is questionable).

Radio stations are keen to help.

Anyone know who Lynne is? We're keen to talk to her on the radio! https://t.co/ypOEHPvFbU

Maybe David is married. Maybe he has decided to forsake technology, and vowed to never ever use the internet or talk about anything that happens on there. But maybe, just maybe, he will see the note, and maybe this will be the start of something beautiful. As they say: nothing ventured, nothing gained. Lynne - we wish you luck!