Three Energie bikes in the lineup starting at £775, two of them with a SRAM single-chainring drivetrain
by Mat Brett The top-level bike in the range is the redesigned full-carbon Energie Pro at £1,599.99. This is a full-on cyclocross race bike and Vitus says that the frame has been reduced in weight by 200g compared to the 2015 model. It also has increased mud clearance. The Energie Pro is one of the bikes that’s equipped with a SRAM 1x (pronounced ‘one by’) drivetrain – Rival 1. 1x comprises a single chainring matched up with a wide-ranging cassette. 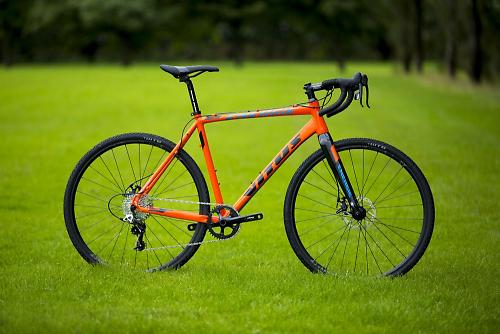 The second bike in the range is the Vitus Energie (without the Pro) at £929.99. It also comes with a SRAM Rival 1x drivetrain but this time the bike is built around a 6061-T6 aluminium alloy frame with a revised geometry. A longer top tube and shorter stem are designed to improve handling while the narrow 27.2mm diameter seat post is designed to add comfort. The fork that plugs in the front is full carbon with a tapered steerer to improve tracking and a 15mm thru axle system rather than a standard quick release. The final bike in the cyclocross range is the Energie GR (£774.99). Vitus says, “This all weather, all discipline, all day training and commuting bike is aimed as a true “do it all” bike geared towards those who want to explore and take the roads less travelled.” This one is fitted with Shimano’s brand spanking new 2016 Tiagra 10-speed groupset but with TRP’s Spyre mechanical disc brakes, which scored very highly when we reviewed them here on road.cc. All three bikes will be available from www.chainreactioncycles.com from the end of this month.

You’ll be able to see the Vitus Bikes on stand H131 at the Cycle Show, September 24th-27th, at NEC Birmingham. You can buy tickets to the show at www.cycleshow.co.uk.