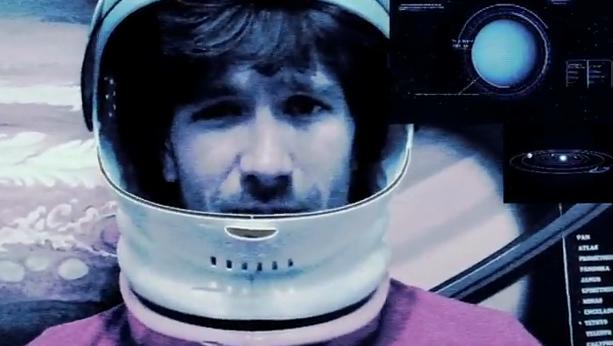 April 1: Pearl Izumi tests chamois insert by taking it all the way to Uranus

Well, it is April 1st...
by Simon_MacMichael

US-based cycling clothing firm Pearl Izumi has revealed that it is working on a project, kept secret until now, to test its new chamois insert in outer space to help ensure that you get the maximum comfort possible during your ride on that most delicate of contact points with the bike, your rear end.

The project will see Pearl Izumi take its 4D chamois insert, used in its Pro Series cycling shorts, to one of the most harsh environments in the solar system, Uranus, based on the premise that if it’s up to job there, it will cut it on the road back on Planet Earth.

As for the insert itself, Pealr Izumi's Cache Mundy said: "We used computer pressure map testing to pinpoint the exact location, thickness and density of our chamois padding technology to key contact points for optimal short and long-distance riding comfort."

Mundy, described as lead director of Pearl Izumi's top secret Project Uranus, added: "This technology will dampen vibrations which can lead to rider fatigue and numbness, and will allow riding enthusiasts of all skill levels to reach their riding goals, whether it's an epic ride with your local bike club, or long-distance treks to Uranus."

Experts have cast doubt, however, on Pearl Izumi’s claims to have conducted research on Uranus. We spoke to Dr Hans van Komfiars, a senior bicycle research fellow at the University of Spokenweels in The Netherlands, who said: “For sure this is a spoof. Pearl Izumi says it’s invested ‘millions of dollars’ in the project – come on guys, this is the cycling industry we’re talking about, you’ll have to try harder than that!”

Pearl Izumi has, however, produced video evidence to back up its claims, with a journalist interviewing key members of the project staff to get to the bottom of their obsession with Uranus, together with footage of David Zabriskie apparently on his way to the planet to carry out testing.

We’re not being caught out on this of all days, so we referred the video to our panel of linguistic experts – we feel it’s always useful to have one on hand, just in case – which is chaired by Professor Hugh Ermissus of the University of London’s specialist double entendre research facility at Pratts Bottom, near Orpington.

“The clue this is a fake lies in the pronunciation of ‘Uranus,’” he explained. “Throughout the video, the journalist says ‘your ay-nus,’ much as a 13-year-old schoolboy would, rather than the ‘your-uh-nus’ pronunication favoured by science teachers. That proves that the woman is an imposter, a comedy actress, perhaps – no serious journalist would ever stoop to such a puerile attempt at humour.”

1
Near Miss of the Day 669: Cyclist confronts driver after 'worst overtake I've ever seen'
2
Cyclist sprints away from knife-wielding mugger – and warns others to be vigilant
3
Mark Cavendish reveals ‘hole behind heart’ after serious crash in Belgium
4
New Zealand MP goes into labour, cycles to hospital to give birth
5
Brazilian speedster aims to hit 300km an hour next year to become world’s fastest cyclist (+ video)
6
Five cool things coming soon from Shimano, SunGod, Muc-Off, Maap and The Road Book
7
West Oxfordshire town’s residents take on suspected bike thief
8
Near Miss of the Day 665: "Probably the closest I've come to being wiped out for a while”