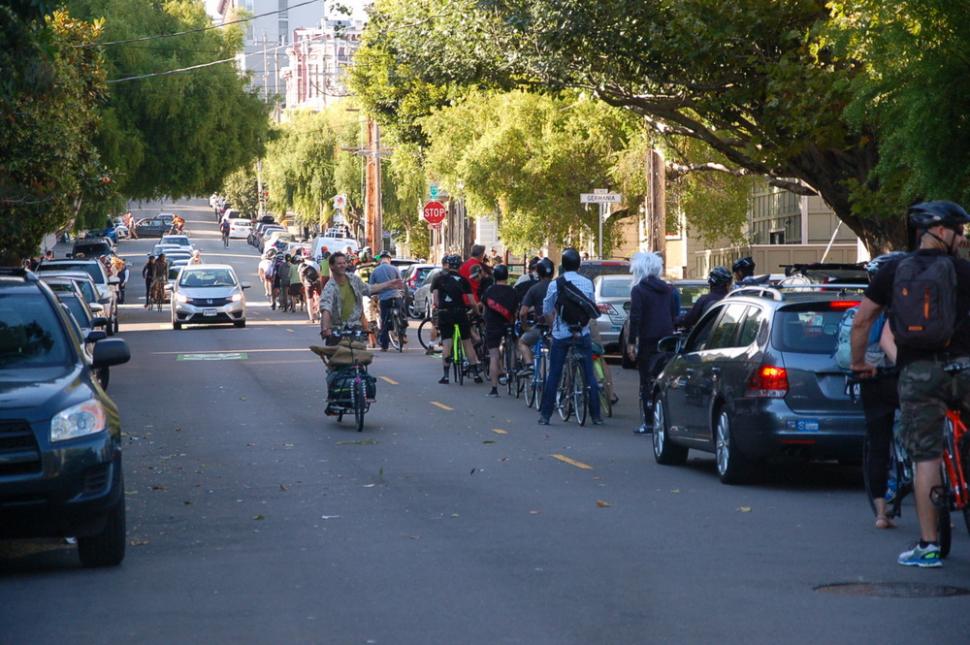 After threats of a police crackdown of stop line jumping, riders cause gridlock by obeying traffic laws
by Laura Laker

San Francisco cyclists brought traffic to a halt last week by stopping at every red light and crossing in response to a police crackdown on red light jumping.

Hundreds of cyclists rode across the Wiggle - a zigzag on-road bike route which avoids the city's hills - in single file during evening rush hour in response to a police directive to punish cyclists for riding through stop signs.

Riders approached every stop line as cars must do, coming to a complete halt and only moving forward when they have the right of way, rather than making a 'rolling stop' as many cyclists currently do. Their point was bikes shouldn't be treated the same as cars as they don't present the same dangers.

"The thing you say you want — every cyclist to stop at every stop sign — you really don't want that," Morgan Fitzgibbons, one of the protest's organisers, told SF Weekly. "You're going to destroy traffic in every neighborhood that has a heavy dose of cyclists."

Campaigners say police should be focusing on law-breaking drivers, who present far greater risk to safety than cyclists. During the protests drivers were reported honking their horns in frustration and confusion about the delays and over why cyclists weren't riding through the junctions as normal.

San Francisco Police Department's (SFPD) Captain John Sanford called for the crackdown in June after witnessing cyclists overtaking him in the Park District. "I'm in an unmarked black police car, and they're just zipping past," he said.

"bicyclists are required to follow the rules of the road," Sanford said. "There's a thing called a stop sign that bicycles are supposed to stop at."

The San Francisco Bicycle Coalition (SFBC), criticised Sanford's focus on bikes given the SFPD signed up to Vision Zero, supposedly targeting the five most common causes of traffic injuries, all of which are violations by motor vehicle drivers.

In a recent blog the SFBC said: "The San Francisco Bicycle Coalition is shocked to see SFPD shifting resources away from enforcing against the deadliest traffic behaviors. SFPD has a long way to go towards fulfilling their own promises to make our roads safer for everyone who bikes, walks and drives."

Protesters are calling for the city and California to adopt the Idaho Stop law, introduced in Idaho in 1982, which allows cyclists to treat stop signs as give way signs, and red lights as stop signs, allowing them to proceed if the junction is clear. This allows them to clear the junction faster, increasing rider safety and clearing the way for motor traffic.

"Stop signs are major hindrance to bike safety and have an impact on pedestrian safety,"