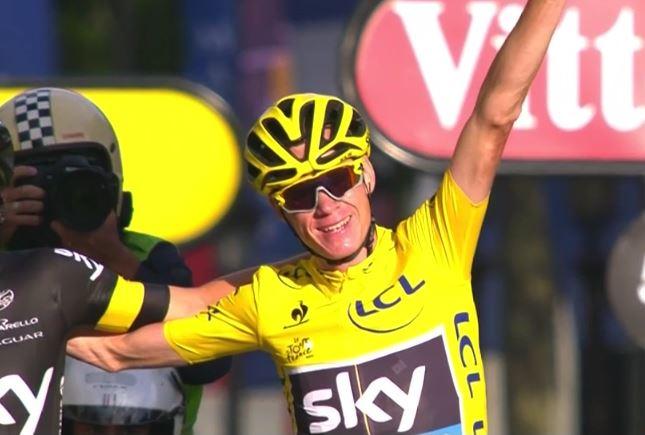 Chris Froome of Team Sky has become the first British rider to win the Tour de France twice, on an afternoon when André Greipel of Lotto-Soudal won what is often called the sprinters’ world championship in Paris – his fourth stage win in this year’s race, confirming his status as the best of the fast men in this year's 102nd edition.

It's the third British victory in the past four editions, with Froome, winner in 2013, having finished runner-up to former team mate Sir Bradley Wiggins the previous year.

With a heavy downpour in the French capital earlier in the day causing a number of crashes in La Course, the women’s race won by Anna van der Breggen, race organisers ASO decided to take the final times of the 102nd edition of the Tour on the first crossing of the finish line.

Usually, a Tour de France winner-in-waiting would have to wait until passing under the 3km to go banner to be assured of their victory, but that decision to take the timings earlier meant Froome was less panicked than he might otherwise have been when a brown McDonald’s bag got lodged in his rear wheel with 10km left.

As it was, he swapped bikes - a second yellow Pinarello, the colour of the maillot jaune also replacing the blue on the Rapha kit his colleagues sported today as they led him into Paris at a sedate pace following the stage start in Sevres, with the typical last-day photocalls and end-of-term feeling.

Ordinarily, once the yellow jersey is led across the finish line for the first time, racing begins in earnest, but it wasn’t until the third of nine 7km laps that a rider made a move, and it was Sylvain Chavanel of IAM who did so.

Subsequently, three riders - Kenneth van Bilsen of Cofidis, Bretagne Seche Environnement’s Florian Vachon, and Lampre-Merida’s Nelson Oliveira got away at the head of the race.

Greipel’s Lotto-Soudal team kept the break on a tight leash, but inside the final 2km no one team was taking on the leadout, with a scrappy sprint beckoning.

But then, coming on to the Rue de Rivoli ahead of the flamme rouge, Katusha came to the front, and their sprinter Alexander Kristoff tore out of Place de la Concorde and seemed set to win.

He finished third, however, as both Greipel and Bryan Cocquard of Europcar, second, passed him at the end of one of the more closely fought sprints the most famous finish line in cycling has seen in recent years.

Romain Bardet of AG2R-La Mondiale was in the polka dot jersey today, but the mountains classification was won by Froome.

The 24-year-old French hope did get to visit the podium, though, as the winner of this year’s overall combativity prize for exploits including his Stage 18 win at Saint-Jean-de-Maurienne.

Froome, meanwhile, is the first Briton to win the classification since Robert Millar’s victory in 1984, and the first rider since Eddy Merckx in 1970 to win both the polka dot jersey and the maillot jaune for overall champion in the same year.

Peter Sagan of Tinkoff-Saxo meanwhile is confirmed as points champion for the fourth year running – unprecedented for a rider making just his fourth participation in the race – while Movistar’s Nairo Quintana, runner-up to Froome, is best young rider, just as he was in 2013.

Chris Froome of Team Sky, winner of the 2015 Tour de France and King of the Mountains

The yellow jersey has a long history. I've always respected and honoured it. I've been proud of it every day I've had it. It's been long to reach this second win, step by step. So many things have happened since we started in Holland.

It's been stressful. We've had to fight, on the bike and off the bike. I feel better now because I wanted this picture of the podium so badly. That's why I wake up every morning to go and train.

I'm unable to say if this victory is nicer than last one. Winning the Tour de France once is incredible. To be here a second time means a lot.

I'm happy and excited. It's my second podium for my second participation. We also won the teams classification, which is very important for those who usually don't get rewarded. The podium is spectacular.

Compared with two years ago, this time I came as a sole leader and it adds value to my achievement.

In 2013, I was in a state of shock, I didn't understand what was happening. Now I'm more mature. I'm more of a leader. My career is going very well.

Peter Sagan of Tinkoff-Saxo, winner of the points classification for the fourth year in a row

It's been a hard Tour since the very first stages. The fight was hard and the points scale was different from last year's. The most important for me was to not have crashed.

I've done my best all year. I think I've done well. It's been a nice experience to do the Tour with someone like Alberto Contador, he's a big champion.

This is the most amazing place for winning a bike race. It's a dream coming true. I've claimed the biggest success of my career on the Champs-Elysées, in the capital of the sprint. I had tried four times before and I'm delighted that I've finally done it in 2015.

Nobody will be able to take this victory out of my record book. I've got it because of my family and trainers. I thank them, as well as my team Lotto-Soudal. We've had an amazing Tour de France.

We've won four bunch sprints out of five. It's been three weeks of happiness because of everyone's commitment. Greg Henderson who was injured has managed to come back to Paris. He played a part in our success. He was in the car today and he spoke to us through the radio.

As everyone could see, we took the control of the race when there was a breakaway. My team-mates have done everything for a bunch sprint finish. We didn't want to be at the front too early. I was a bit far behind in the last curve but I had the legs to finish it off.

Since I've been a pro cyclist, there hasn't been a single year in which I didn't see myself improving. I still feel young, even though this Tour de France has made me three weeks older. I'm in a good condition. I'm ready for new challenges in the future.