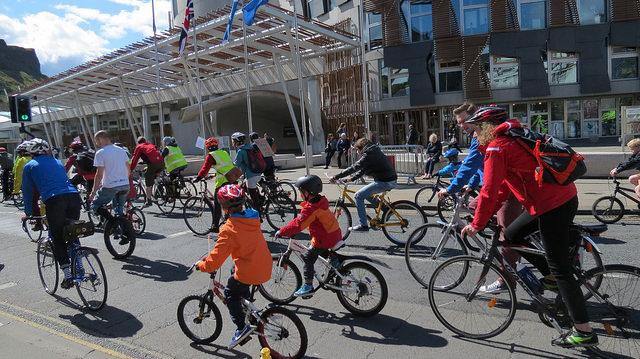 September 16-22 will be European Mobility Week, reports BikeBiz. During this week, a host of European towns and cities will commit to a number of different events, including a car-free day. At present, Lambeth and Aberdeen are the only two parts of the UK involved out of 266 towns and cities Europe-wide.

The theme of this week’s European Mobility Week is ‘multimodality’ and the aim is to encourage people to try different forms of transport which may be more appropriate than simply hopping in the car regardless of where you’re going.

Participating towns and cities are asked to take part in one of three options to celebrate the week: to hold a week of activities focused on multimodality and sustainable travel; to implement one or more permanent transport measures, such as building cycle lanes or widening footpaths; or to hold a car-free day with a road or multiple roads closed to all but pedestrians, cyclists and public transport.

An area of Aberdeen City Centre, encompassing Schoolhill, Belmont Street and Little Belmont Street, will be closed to traffic and devoted instead to a large free public event on the themes of sustainable mobility and 'taking back the streets'. There will also be a Pedal for Scotland mass cycling event.

Lambeth will close Estreham Road, Streatham to cars on September 26th and the council says it is planning a week of activities.

Councillor Jennifer Braithwaite, Lambeth's cabinet member for Environment and Sustainability, said: "Getting people out of their cars and using greener transport is a high priority for this council. Roads are public spaces and we are increasingly trying to get them used in better ways than solely for vehicle use."

In 2013, Bristol's car-free 'Make Sundays Special' event was hailed as being a great success after motor traffic was banned from several streets in the city centre so that the area could be used for activities. More recently, Amsterdam trialled a Saturday car ban in part of the city with a view to expanding it should it prove successful.