In our latest round-up of Tour de France news, race leader Chris Froome has a pop at French ex-pro pundits, Didi the Devil gets excited at being caught on video, and Lars Boom clocks more than 100kph on Stage 3.

Chris Froome meanwhile says it is “disappointing” to have questions raised about his performance by former French professionals Laurent Jalabert and Cedric Vasseur.

After yesterday’s Stage 1, Froome said: “I think it’s quite rich coming from cyclists like Jalabert and Vasseur to be commenting on my racing in such a way.

“I think it’s really disappointing. Those are the guys that a lot of people, a lot of fans, a lot of supporters look up to as idols of their time. And here they are casting doubt on current cycling and a clean cyclist and a clean team.

“These guys are setting the tone – and in my opinion that is not correct.”

Neither Vasseur nor Jalabert have ever been sanctioned for doping, though the latter’s name was on a list of riders from the 1998 Tour de France who were found to be positive for EPO when samples were retested in 2004, according to a French Senate report published in 2013.

Vasseur, who led the 1997 race for five days after a 147km solo breakaway win, rode for US Postal in 2000 and 2001 but said after the seven-time yellow jersey winner was banned in 2012 that he had left the team because he did not want to take performance enhancing drugs.

He was one of the Cofidis riders, including David Millar, arrested on suspicion of doping, but was subsequently cleared when a counter-analysis proved negative.

During this year’s race, Velon’s footage has expanded to include not just on-bike filming, but some of the wider circus around the Tour – and it’s nice to see Didi the Devil back on the roadside a couple of years after it looked like he might have had to hang up his trident for good through ill health. He’s certainly excited to see the camera.

Didi, who underwent surgery on a brain lesion back in 2012, is an old friend of road.cc – here he is with editor Tony and sometime contributor TR at Eurobike a few years back. 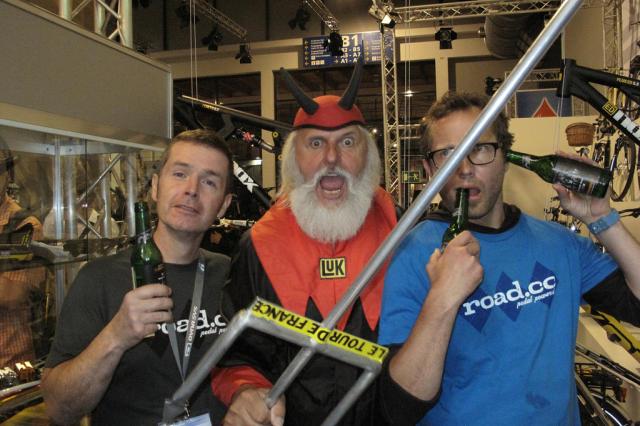 Lars Boom, poster boy of the Utrecht Grand Depart, nearly didn’t start this year’s race – remember that business with his low cortisol levels that led to his Astana team being suspended by the MPCC? – and he has since abandoned through illness.

But the Dutch rider leaves the race with one distinction – official data reveal that he clocked up the highest speed so far on this year’s edition, hitting a shade over 109kph on last week’s Stage 3, which finished on the Mur de Huy.

It’s safe to say he was going rather more slowly on that concluding climb of the stage, best known as the finish to Fleche Wallonne, which annually has some of the top mountain goats in the peloton struggling to turn the cranks over.

The former world cyclocross champ’s data made the news during last year’s race, too – on the soaking wet Stage 5 over the cobbles of Paris-Roubaix, his Strava upload revealed that he had taken the win at an average speed of 45.9kph on a day when many of the world’s top riders struggled.