The special equipment of the Tour de France time trial

In the race against the clock, seconds really can make the difference between winning or losing. Just ask Greg LeMond: the American introduced aerobars to the Tour back in 1989 and eventually won the race by a scant 8 seconds, a success largely attributed to his ready adoption of aerodynamic components.

The modern time trial bike is a futuristic looking thing. Shaped by complex computer software and tested in a wind tunnel, time trial bikes are developed specifically for the task of going as fast as possible. And it’s not just the frame and fork, but the wheels, handlebars, brakes, even tyres. Every component is intended to reduce drag as much as possible.

That produces some rather interesting, and some very bespoke, solutions to achieving the perfect position and reducing drag, the big enemy of going fast in a time trial. We've shown you the time trial bikes they'll be riding, but here's a closer look at some of the special equipment we spotted developed to help the riders go as fast as possible. 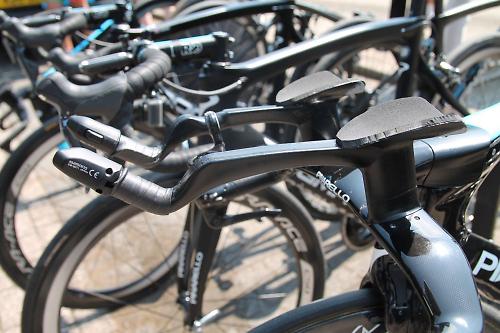 Chris Froome has clearly been inspired by the custom 3D printed handlebars that Sir Bradley Wiggins used to clinch the Hour Record recently, and has his own custom handlebars. Froome isn’t alone in receiving a set of these handlebars, Geraint Thomas was also sporting some on his time trial bike. We don’t know a lot about them, the Team Sky mechanic was being very coy, but it’s obvious the team have decided to produce these custom extensions to achieve a more desirable aerodynamic position. You can see Thomas using them in the photo above, and how his hand fits into the small recess at the front. They have the Shimano Di2 shifters integrated with the cables internally routed, a short section of bar tape, and a set of very homemade foam armrests. A K-Edge Garmin mount is fitted. The custom extensions are seamlessly fitted to the same regular Pinarello base bar used by the rest of Team Sky. 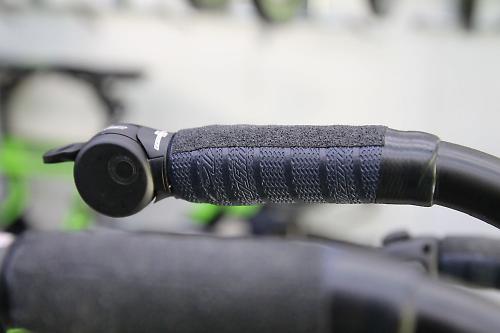 Another common addition is the application of a grippy material, like the sort you get on skateboards, to the base bars. That’s to provide more grip, especially handy in a time trial when undoubtedly a lot of sweat will be produced. 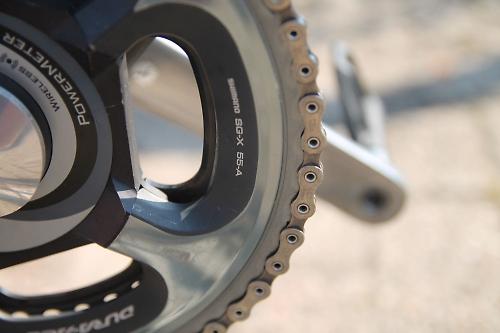 Bigger chainrings are the order of the day. 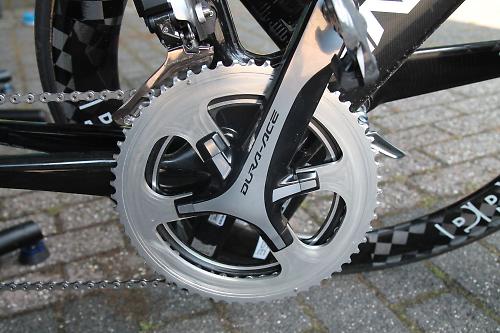 So much so that Geraint Thomas had this custom machined chainring on his Pinarello Bolide time trial bike. We’re guessing Shimano doesn’t make one in the size he wanted.

Saddles are a big change from the saddles you see on normal road bikes. Most use a specific TT saddle which is shorter, with more padding in the nose as most positions place the cyclist right on the tip of the saddle; they like to get as forward over the bottom bracket as possible. 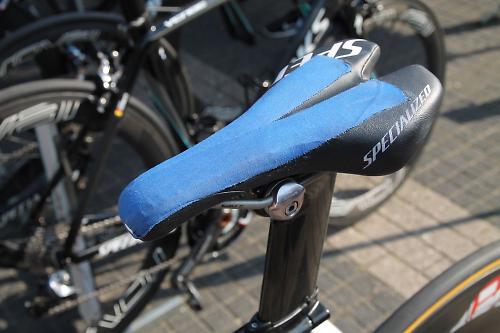 Plenty of the saddles are modified with a grippy material. That’s to prevent slipping and shifting on the saddle, especially when they’re really expending the watts. Tony Martin has a custom saddle that is covered with tape for training purposes, only revealed on race day, to save wearing out his shorts. Many saddle manufacturers produce stock saddles ,but some have to resort to some personal customisation.

However, article 1.3.002 in the UCI rule book dated stipulates this isn't really allowed.

Modifying equipment used in competition in relation to products supplied by the manufacturer is prohibited for obvious safety reasons. Whether it is a matter of modifying the length of the saddle, adapting approved wheels, filing off fork drop-out safety lugs, meeting the 3:1 rule by adding tape to handlebars or adding a nonslip system on the saddle, no modification of equipment that is not conducted by the manufacturer is authorised by the UCI without prior approval.

That ruling doesn't appear to have put a halt to this modification, as it's a popular one in the peloton. 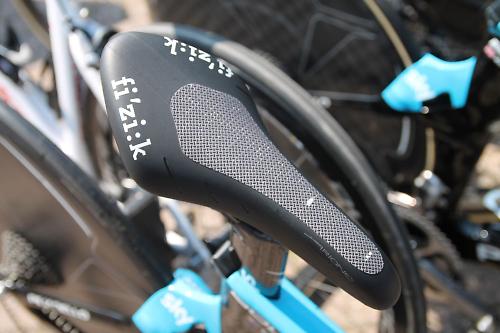 Richie Porte uses a Fizik Arione TT saddle, it’s more deeply padded than a regular Arione saddle though. It’s also finished with a piece of grippy material, which has been very neatly applied. Don’t go looking on the Fizik website hoping to buy this saddle though... 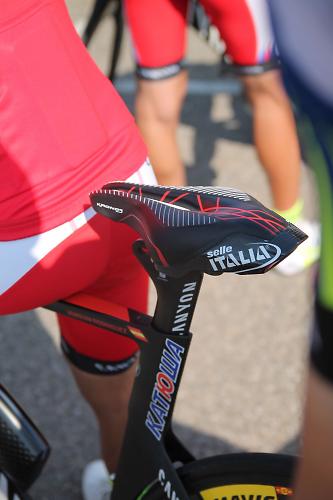 One of the more unusual looking time trial saddles spotted on a Katusha team bike.

The newer time trial bikes cleverly package more of the components inside the frame, but this wasn't the case on all the bikes. The Orica-GreenEdge Scott Plasma time trial bikes have the Shimano Di2 battery and junction box both mounted to the saddle rails. It’s neatly done, and certainly out of the wind, but does look a bit of a bodge. 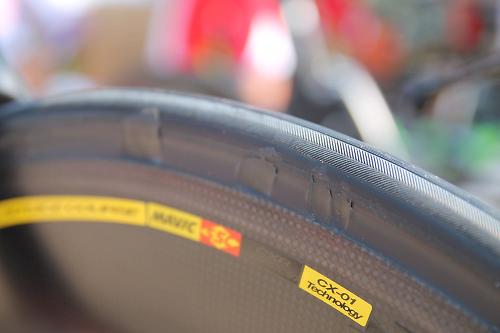 Two of the Mavic sponsored teams, that’s Katusha and Cannondale, were spotted with Mavic wheels with a silicone sealant applied to the tyre. It’s obviously designed to smooth the indent between the tyre and rim, a fairing basically, and we’re not sure that’s allowed by the UCI rules. We’ve sent them an email to find out how close to the line this measure is.

It’s not so long ago that Mavic introduced the CXR80 wheelset with the CX01 removable plastic fairing blades, designed to smooth the area between the tyre and rim and create a seamless airfoil shape. The wheels came with some impressive wind tunnel results. The blades were swiftly banned by the UCI. Even the humble water bottle is specially modified for the time trial. This Tacx aero water bottle is narrow and shaped to reduced drag compared to a regular water bottle, and features some dimples for good measure. Most time trial bikes use modified brakes, very different to the regular brakes you get on a road bike. Many are positioned out of the wind. Cervelo’s P5 is the only bike in the peloton to feature Magura hydraulic disc brakes, with an aero fairing providing a very slippery looking appearance. The front brake on the Canyon Speedmax is barely visible from the front. It's concealed in a compartment at the back of the fork, covered by a flap, and looks a very clean solution. Here's the rear brake on Team Sky's Pinarello Bolide, hidden behind this fairing. Keeping tabs on your power output during a time trial is desirable for some, but that can present problems with where to mount your computer of choice. Some use a readily available mount. Some, such as on Tony Martin’s Specialized Shiv, use a custom made mount. 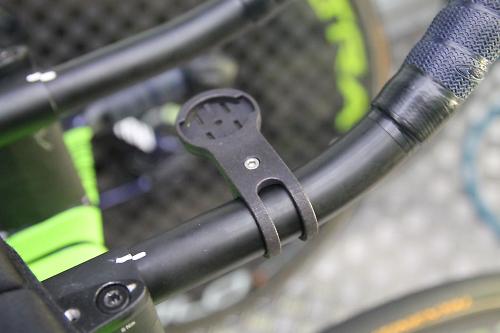 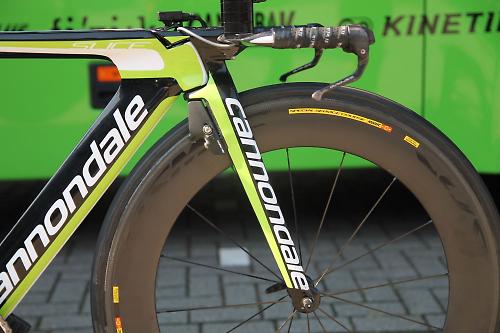 A common trend with the latest generation of time trial bikes is to integrate the stem into the front of the frame, helping to produce a cleaner and smoother front-end to reduce drag. It also allows a much lower position to be achieved as well. This Cannondale Slice has a mini V-brake mounted on the back of the fork blades, which extend all the way from the dropouts to the stem. Wider tyres have become popular on road race bikes, but on time trial bikes narrow tyres are still king. We spotted numerous tyre widths, but 22mm was the most popular, at least on the front wheel. Some bikes combined the narrow front tyre with a wider, say 24mm, rear tyre.