It's all about the pave in today's stage of the Tour de France, here's some of the special bikes that will see action
by David Arthur @davearthur

The 2015 Tour de France heads closer to France but not before the race navigates the pavé of Belgium in the longest stage (223.5km) of this year's race. With 13km of cobbles spread over seven sectors, four as featured in the Paris-Roubaix spring classic, this stage has the potential to shake up the order.

We had a good nose around the team hotels last week before the Tour got underway in Utrecht, and it's abundantly clear everyone is taking this stage very seriously indeed. The majority of the teams had brought special bikes only ever seen in races like Tour of Flanders and Paris-Roubaix, with different frame models accommodating wider tyres, changes to geometry and a host of other detail changes, even suspension on the Team Sky bikes.

While some racers will be right at home on these special bikes, many of the racers will never have ridden one of these bikes because they've never taken part in Paris-Roubaix, so it could be an interesting experience for some of the racers on this daunting stage. We saw Mark Cavendish prepping his Specialized Roubaix before the Tour started last week. The US company's Roubaix has had many race wins over the years, and features longer and slacker geometry and Zertz inserts at the fork and seatstays to smooth the ride. 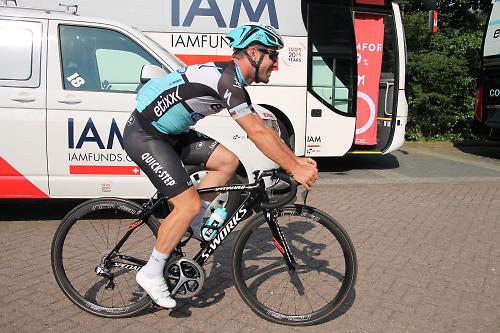 His bike is built up almost identically to his Venge, with a Shimano Dura-Ace Di2 groupset and Roval CLX 40 wheels. The differences in geometry will mean it rides slightly differently though, which is why Cav was logging some miles aboard it on the Thursday before the Tour got underway. 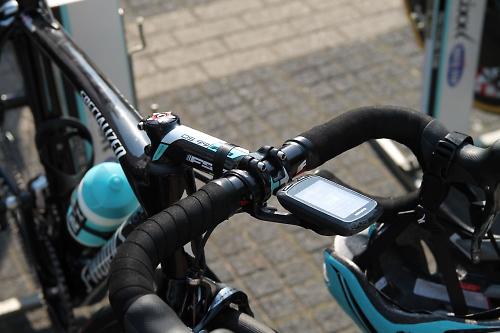 He uses an aluminium FSA handlebar with a lot of bar tape wrap, almost to the stem. Many riders will ride the cobble sectors with their hands on the tops, as opposed to the hoods for drops, for a bit more control. 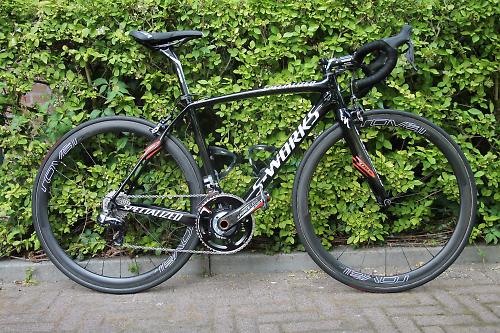 Tony Martin will also switch to a Specialized Roubaix today as well. Here’s his actual bike, with an almost identical build to Cav's bike. 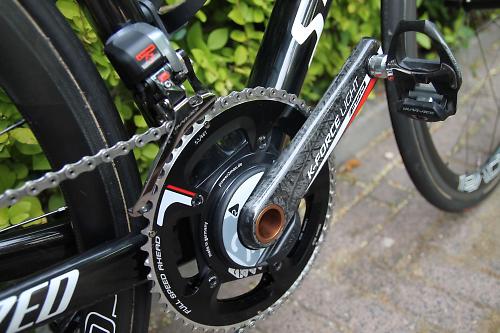 The few changes include an FSA K-Force Light chainset with a Power2Max power meter (Cavendish uses an SRM) and 53/46t chainrings. 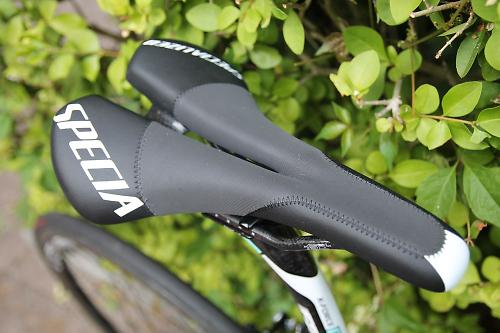 Tony Martin’s Specialized saddle. You’d think it would be nice and cushioned wouldn’t you? It wasn’t. It was as hard as anything, with virtually no padding that I can detect, just a layer of fabric over a plastic base. Ouch.

Posted by CeramicSpeed on Tuesday, 7 July 2015

Alberto Contador, as the Tinkoff team is sponsored by Specialized, will also switch to the Roubaix today. His bike is fitted with the same Roval CLX 40 wheels but wrapped with FMB Paris-Roubaix 27mm tyres, and he combines a Shimano Dura-Ace Di2 drivetrain with an FSA SL-K chainset. 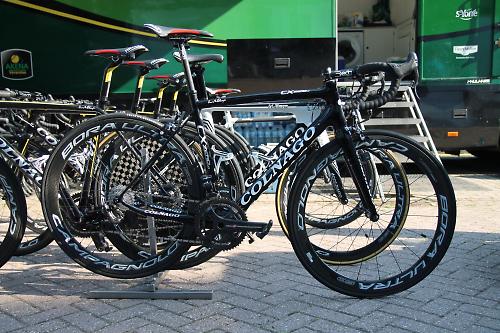 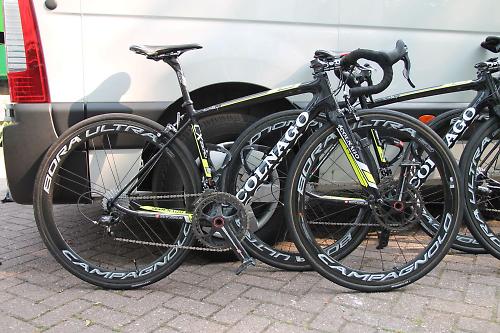 Cannondale’s Synapse makes an outing for the Cannondale-Garmin team, with FMB Paris-Roubaix 27mm tyres on Mavic Cosmic carbon fibre wheels. The Synapse is a bike developed for the cobbles with geometry and a carbon fibre frame designed to provide good handling and comfort over the rough stuff. 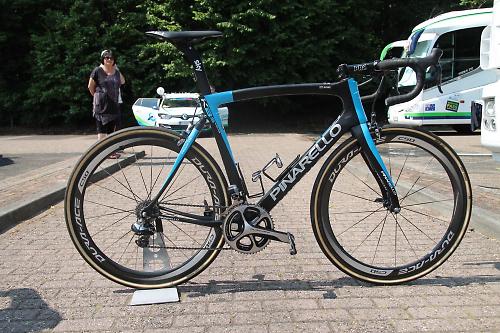 Here's Luke Rowe's Pinarello Dogma K8-S with rear suspension, an adapted seatpost and big 27mm tyres. You can read all about this bike here. 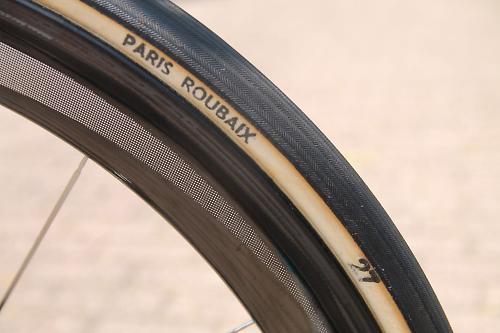 FMB’s Paris-Roubaix 27mm tyres are a very common sight on pave special bikes, and they’re held in such high regard that the teams actually buy them. 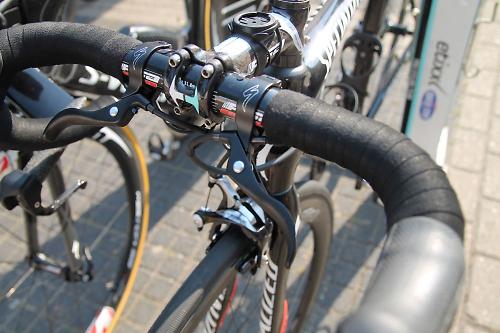 Additional brake levers mounted to the handlebars are quite a common sight on bikes prepared especially for the cobbles. Why? Because many riders prefer to ride the cobbles with their hands on the tops of the bars, and having an extra set of brake levers negates having to change hand position to adjust your speed. These are on Tony Martin’s Specialized Roubaix. And Europcar’s Bryan Coquard has the same brake lever setup on his Colnago CX Zero. Also notice that both bikes have a lot more bar tape wrapped along the middle section of the handlebars too. Along with additional brake levers, some riders opt for extra shift buttons, easy with Shimano’s Di2 groupset, as seen here. Keeping the chain on the chainring can be tricky when its bouncing all over the place, so most mechanics fit a chainguard to hopefully stop the chain derailing. A common change is to size up the small chainring, from 39t to 44t or 46t, two common sizes. There’s no climbing today to speak of, so no need for the low 39t chainring. Fitting a bigger inner chainring provides less of a jump down from the big ring if the rider needs to change down, better suited to the generally high speeds involved in a stage like this. It’s not uncommon for water bottles to eject from bottle cages on the cobbles, so most mechanics apply some sort of grippy tape material to the bottles to provide a little extra security. 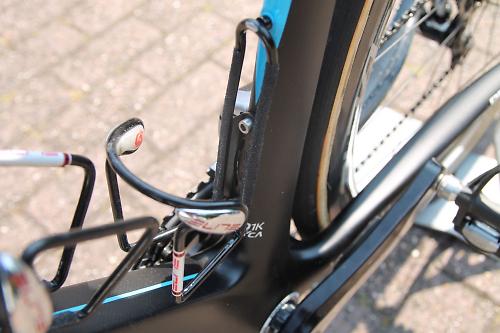 Bottles bouncing over the cobbles can be potentially dangerous for any following rider as well, as well as frustrating when you reach down to find your bottle has vanished and you're choking on dust. Wider tyres will be the norm today, at least 25mm wide, but wider for a lot of teams, we spotted a lot of 27 and 28mm tyres. There are rumours the IAM Cycling team will be using Schwalbe One tubeless tyres. The Europcar mechanic told us that the team use 24mm Hutchinson tyres for regular stages, and 28mm for today’s cobbles.

More bikes and tech from the Tour de France.

1
Cyclist driven into by Range Rover driver blasts "victim-blaming twaddle" from police who initially refused to take action
2
Commonwealth Games marshal verbally abused by cyclists and motorists for enforcing road closures
3
Pro cyclist no longer rides alone after two 'bikejacking' attempts as violent incidents increase
4
Five cool things coming soon (but on a budget) from Vittoria, Decathlon, Topeak, Hutchinson and Formbeat
5
Dual carriageway time trials suspended after cyclist killed on A11
6
Road rage motorist assaults cyclist and steals his camera after accusing him of ‘not riding in the bike lane’
7
Near Miss of the Day 810: Reckless overtake towards oncoming cyclist and bus… and some afters from the impatient driver
8
Drug driver sentenced to 21 months in prison for killing cyclist – seconds after using his phone to text friend