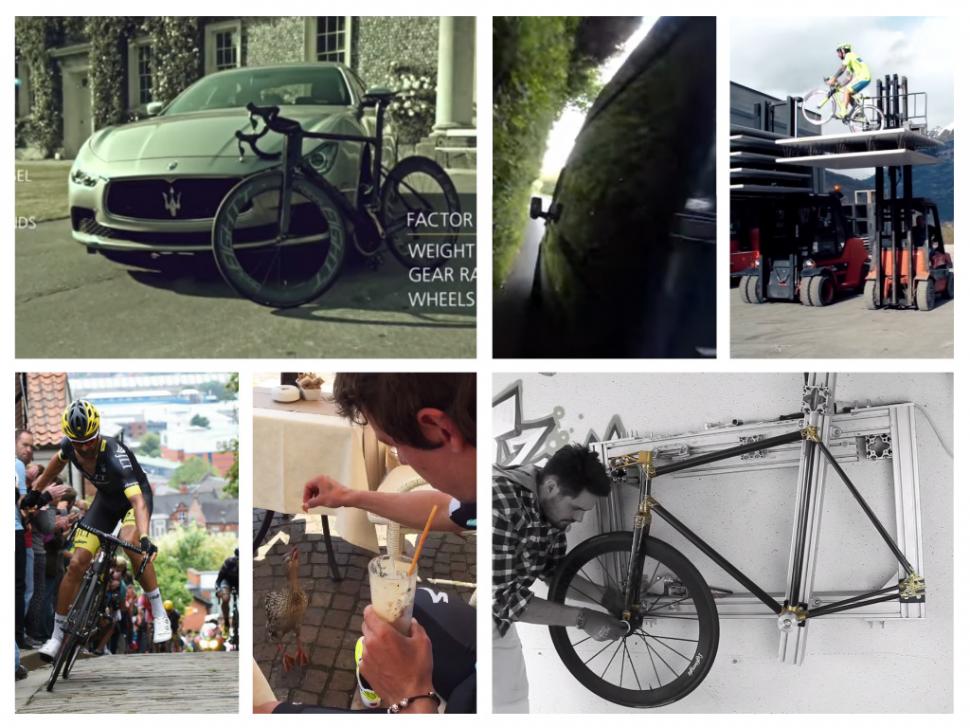 The fun doesn't stop there, later on we've got a cyclist faceplanting a bike, or bikeplanting his face - you'll understand when you see it - the closest pass we've ever seen on UK roads, a beautiful how-it's-made video of a stunning black and gold 3D printed titanium lugged carbon track bike from VRZ, and an eye-opening GIF showing how rubbish parking-adjacent bike lanes are.

We wonder how Contador would fare in a race up forklifts. Brumotti would probably have him there.

It's much easier to knock down a house of the Kristian variety than it is the bricks and mortar kind, it seems.

Despite their cutesy appearance, ducks are noteriously vicious. Perhaps Rigoberto got away lightly after taunting the beast.

Within a rupture of space time, it seems David Millar has done the impossible and both lost and won a race at the same time. Or perhaps it was a draw, the weird Maserati/Factor advert is not particularly clear on the competition specifics. It looks fun though.

The closest of close passes... *shudder*

If you're of a nervous disposition and want to ride you bike on the road again, look away now. This blue van passes unbelievably close to this cyclist. We can't quite believe the rider emerged unhurt. Stay safe out there everyone.

In a feat of balance and patience this street performer manages to use a kickstand to balance a bike with spinning wheels on his face.

We're not sure quite how to describe the bikefaceplanting that we're seeing, but we are sure that this must have taken hours of very painful practice to master.

This is a thing of beauty. 3D printing is taking off in the bike manufacturing world, and it's leading to some truly stunning designs.

This masterpiece is from Ralf Holleis, and it's called the VRZ 2 Belt.

We've run plenty of stories about contentious bike lanes over the last few years, but this GIF sums up the argument against parking bay adjacent bike lanes better than words can.