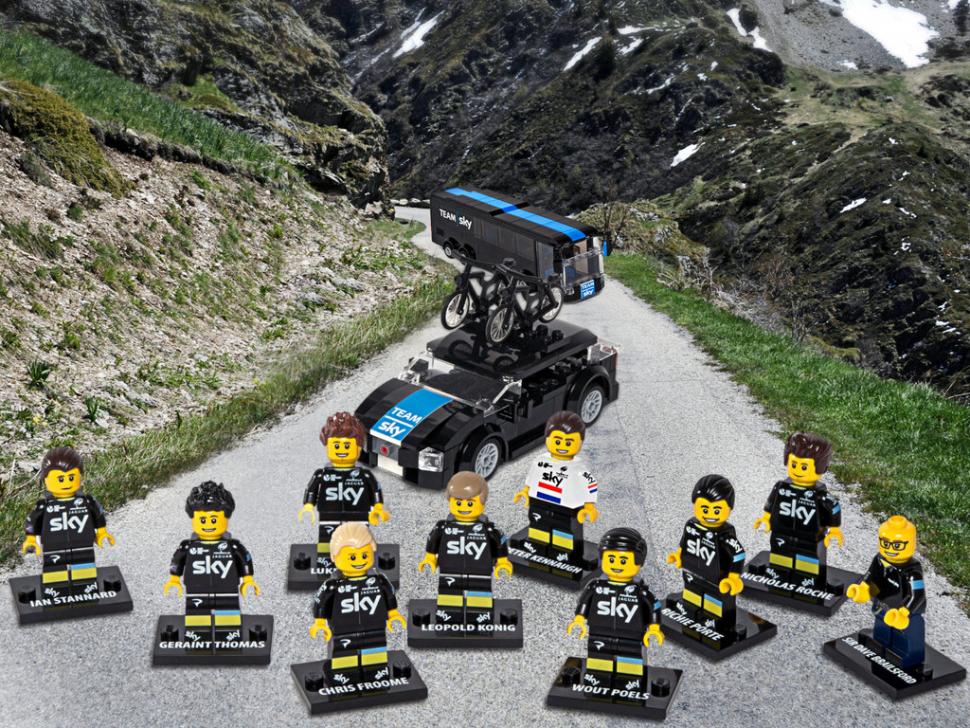 One lucky fan will win one-off brick versions of all nine riders, Sir Dave Brailsford, plus support vehices
by Simon_MacMichael

Many things have been recreated in Lego – from scenes from the Indiana Jones movies, or the Old and New Testaments, to Arsenal’s 4-0 FA Cup final win over Aston Villa in May. Now, they’re joined by Team Sky in being immortalised in the bricks made by the iconic Danish firm.

Team Sky says that one lucky fan will win what is an absolutely unique Lego set – each of the nine riders, team principal Sir Dave Brailsford, plus a Jaguar support car, and the team bus. You can enter the competition here.

Within the confines of Lego options especially when it comes to hair styling, it’s perhaps questionable how good some of the likenesses are – we were under the impression that Mrs Froome is the blonde half of the couple, and Ian Stannard seems to be sporting an entirely new hairstyle.

Sir Dave Brailsford seems to be fairly spot on, mind – although we wouldn’t recommend trying to push a Lego hat down on his head to see if the bricks are compatible.

Team Sky says: “To be in with a chance of winning … we want you to post a photo or video of yourself on Facebook, Twitter or Instagram showing your support for Team Sky. The more imaginative and colourful, the better!”

“So that we see your entry, you must include the hashtag #AllezTeamSky when posting it on your chosen social media platform, and tag @TeamSky in the post.”

If you are lucky enough to win the competition, you might be well advised not to open the box – as we said, this item is a one-off and not for sale.

So it’s worth bearing in mind that for example the Death Star from Star Wars, from which the Team Sky bus took its nickname – will set you back several hundred quid in its original version, but can now go for nearly three grand.

You could buy a (very nice) bike for that, and beyond the Star Wars franchise, discontinued items can appreciate to several times their original cost, like this version of the Eiffel Tower, which we wish we'd bought at a tenth of the cost when we spotted it a few years back, and which Team Sky will be hoping to ride past with Chris Froome in yellow three weeks on Sunday …