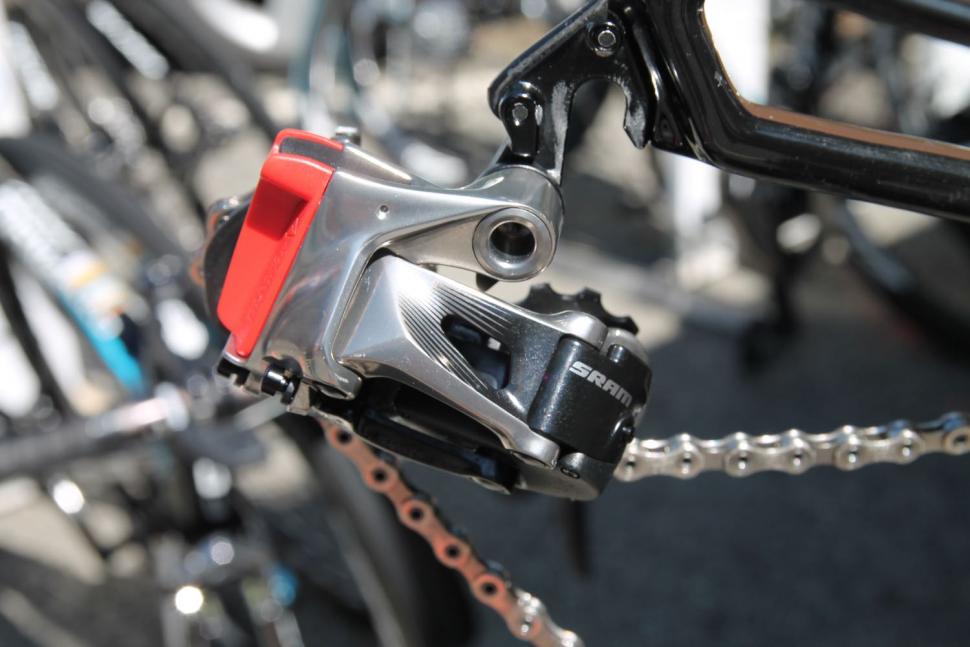 It’s no secret that SRAM has been working on a wireless electronic groupset. We first saw it on bikes at the Tour of California last year, and it’s been spotted on numerous occasions since. 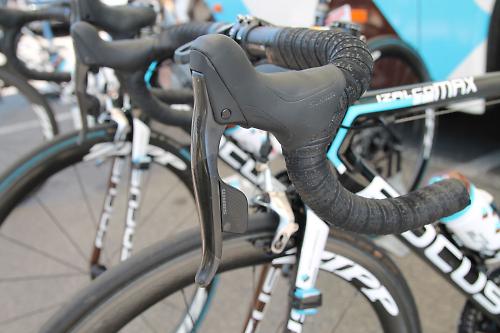 I was at the start and finish of the final stage of the Route du Sud today in the beautiful south of France (and the weather is lovely by the way) and several of the AG2R Focus team bikes were equipped with the new wireless groupset. 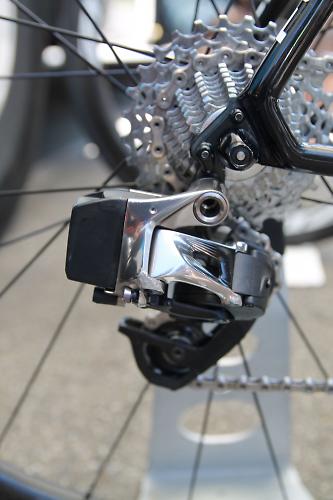 This is the first time I’ve seen the new groupset in the flesh. Looking at it this closely, one thing is very much clear: it looks ready for production. From the graphics on the rear mech, embossed SRAM logos and the ‘Red’ logo on the carbon fibre brake levers obscured only by a strip of black electrical tape, it’s clear the parts aren't at the prototype stage and are being properly manufactured. 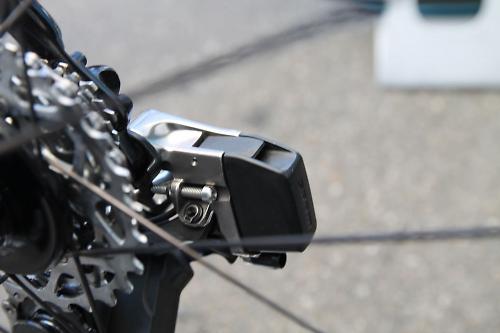 Few details have emerged about the new groupset. SRAM is remaining tight-lipped until it decides to officially unveil it, most likely at the Tour de France. One aspect of its functionality was revealed while I watched the mechanics wash and clean the bikes after the stage. 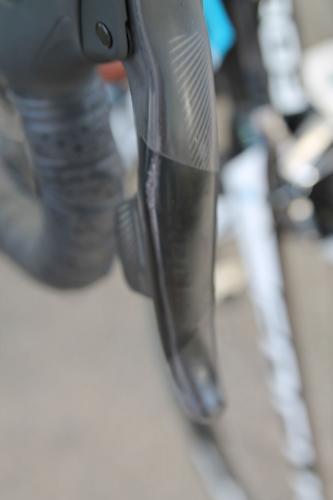 The batteries, the large black plastic units hanging off the back of each mech, are removable. That much was easy to deduce from early photos, but I actually watched a mechanic remove the batteries. And it’s very simple. A clip on the top flips up, the battery pops off, and a red plastic blanking plate is installed to protect the metal contacts while the bike is washed. 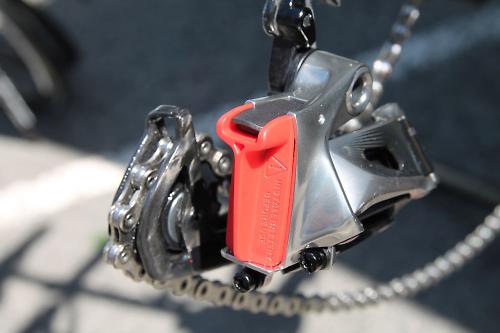 One obvious advantage of the removable batteries is that you don’t have to store your bicycle near a mains power supply, as you do with Di2. I would imagine SRAM has developed its own dock to charge the batteries. It’s not clear how long the batteries last, but combined the two batteries appear the about the same size as a Shimano battery. 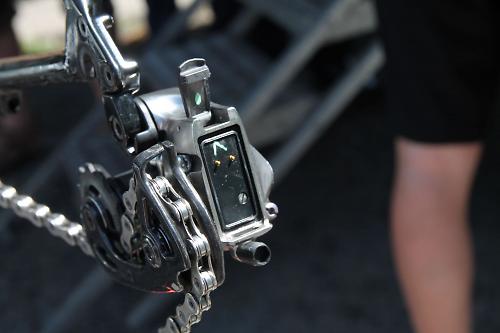 With the battery removed, exposing the metal contacts

Despite the clear readiness of these components, SRAM seems to be keen to get as many race miles as possible logged on the groupset, which is why it’s been spotted at so many races in the last year. SRAM clearly doesn’t want a repeat of the hydraulic disc brake recall. There aren't as many teams using SRAM as a few years ago, but there’s an increasing number of AG2R racers on the new groupset, so it’s slowly being rolled out. We’d expect to see the entire team on the wireless groupset at the Tour de France. 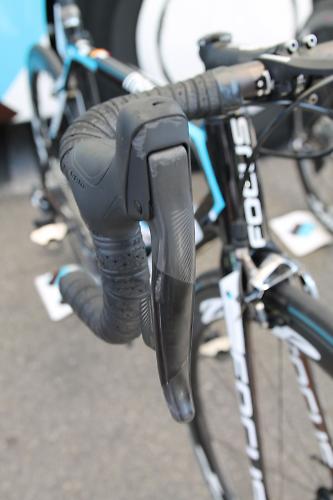 The components in AG2R's bikes have clearly been getting plenty of use; just look at all the scrapes and scratches. That suggests the groupset can handle the odd knock and crash, which bodes well for its launch. Parts used by the pros need to be reliable and tough. 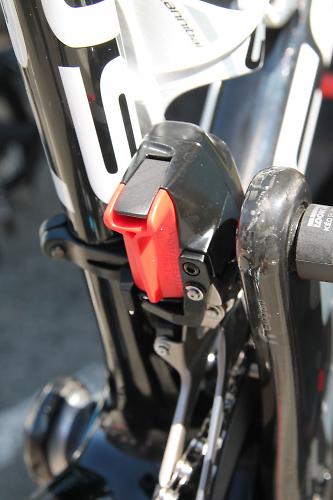 SRAM's wireless group doesn't appear to have a similar central control module. That's different from  Shimano’s Di2 which uses a control module, commonly mounted under the stem, which is used to charge the battery and also to set up the indexing and to make indexing changes during riding. It’s not clear how SRAM's transmission is first set up when installed on a bike, or how changes are made if the indexing gets knocked out of alignment, say following a crash. 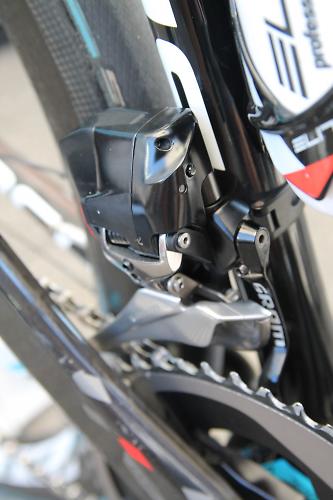 The shape of lever hoods don’t appear dramatically different to regular RED mechanical shifters, but the pointy bit is a bit more, well, pointy, suggesting SRAM has managed to package the electronic gubbins more compactly than its hydraulic brake levers. 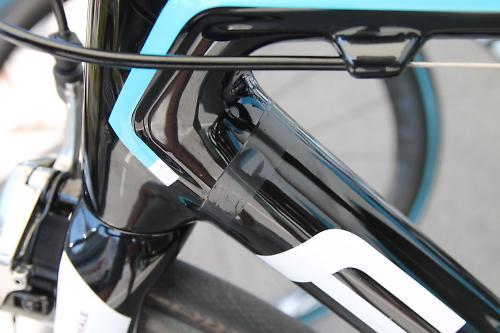 This frame has the Di2 ports taped over because, with no wires, they’re redundant.

1
Team GB says Denmark Olympic team pursuit squad should be banned over use of medical tape on legs and "aerodynamic undervest"
2
Win with Shutt Velo Rapide! Cycling kit worth £510 up for grabs in our latest huge competition
3
Cyclist who killed London pedestrian jailed for two years
4
Pick-up driver who crashed into group of cyclists charged with murder
5
BMX gold for Team GB’s Bethany Shriever, silver for Kye Whyte
6
Adidas’ radical-looking 3D CMPT glasses are super-light... and super-pricey
7
Cycle safety in focus as Highway Code changes revealed, including setting out hierarchy of road users
8
BMX racer Connor Fields out of ICU after suffering brain bleed in horror crash at Tokyo Olympics