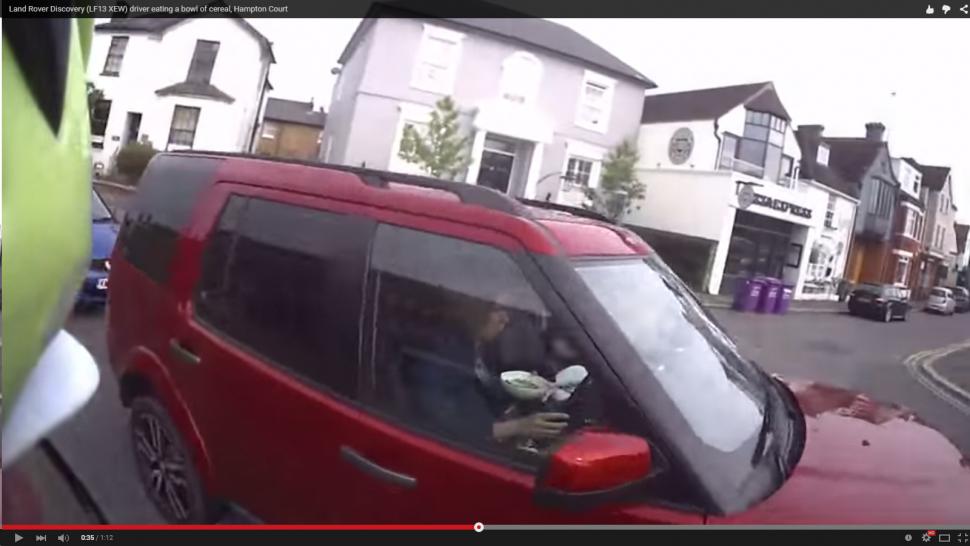 Cereal offender caught eating at the wheel hands herself in to police...in Staines

Woman caught eating a bowl of cereal while driving has handed herself in to Staines Police Station, but won't face porridge...
by Laura Laker

A woman who was caught on camera eating a bowl of cereal while driving has handed herself into police in Staines today.

The 51-year-old woman, from East Molesey, South West London, was confronted by David Williams who caught her driving her Land Rover with one hand, while holding a bowl of cereal with the other, as he cycled past. Williams handed his footage to police on Wednesday.

The woman, who voluntarily attended Staines Police Station, and was interviewed by officers from Surrey's Roads Policing Unit, is unlikely to do porridge - but she could face a driver improvement course or fixed penalty notice.

Surrey Police said in a statement: "On Wednesday, 17 June Surrey Police received a report from a member of the public who had seen a woman driving whilst eating a bowl of cereal at the junction of Creek Road and the A309 Hampton Court Way in Molesey.

"The woman was issued with a Driver Referral Notice for the offence of driving whilst not in proper control of motor vehicle.

"This notice will be submitted to the Force’s Traffic and Process Unit (TPU), who will review the case and make a decision regarding any further action – which could include sending the individual on a driver improvement course or a fixed penalty notice."

Williams, who is also a cycle instructor, has since been the subject of an angry Daily Mail article, which has branded people who use helmet cameras the "Cycling Stasi", and "infuriatingly, throat-throttlingly, red-mist-inducingly smug".

Surrey Police remind anyone who believes they have witnessed an offence to report it on 101 or on their website here.