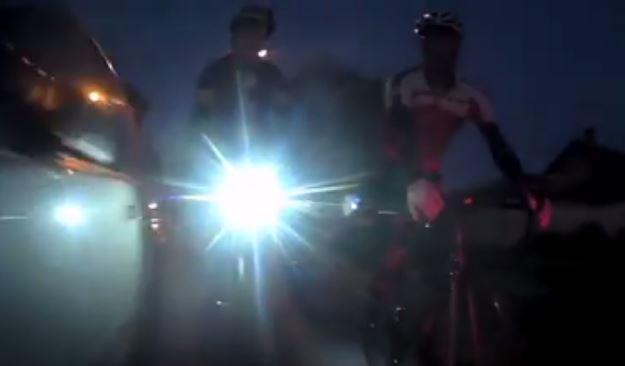 Rider catches up with vehicle at next set of traffic lights, registration details and footage passed to police
by Simon_MacMichael

Members of a group of cyclists near Perth in Western Australia were lucky to escape with nothing more than cuts, bruises and some road rash after they were hit by an overtaking pick-up truck, with the driver failing to stop.

The incident, which was caught on rear-facing Fly6 cameras on the bikes of the two riders at the front of the group, shows the cyclists riding two abreast, as they are allowed to do by law.

One car gives them plenty of space as the driver overtakes, a second comes far too close for comfort, but a third hits one of the riders, sending him crashing to the ground.

The film of the incident which took place on Morrison Road, Midland, Western Australia on Saturday evening was posted on the Facebook page of the Australian Cycle Alliance, together with the hashtag #cowardsrun – a term used to describe motorists involved in hit and run crashes.

In their post, they said:  “What we know is that the car was caught up at the next lights, registration plate was collected and the police have been notified. This will be going to court.”

They added: “This is a horrible crime, a Hit'n'Run is a most disgusting way to treat another human being. If you hurt someone, you own your error, you ensure everyone is OK and you deal with it.”

Many people commenting on that Facebook post noted that the movement of the pick-up truck involved suggested that the driver may have been deliberately trying to knock the riders off their bikes.

In response to questions about whether the road conditions meant it was safe to ride two abreast there, one local cyclist, Heath Bell, said: “The road is actually quite wide. Camera doesn’t do it justice.

“Add to that there is substantial section down the middle without medium strips where cars could easily pass like the two previous to this scumbag.”