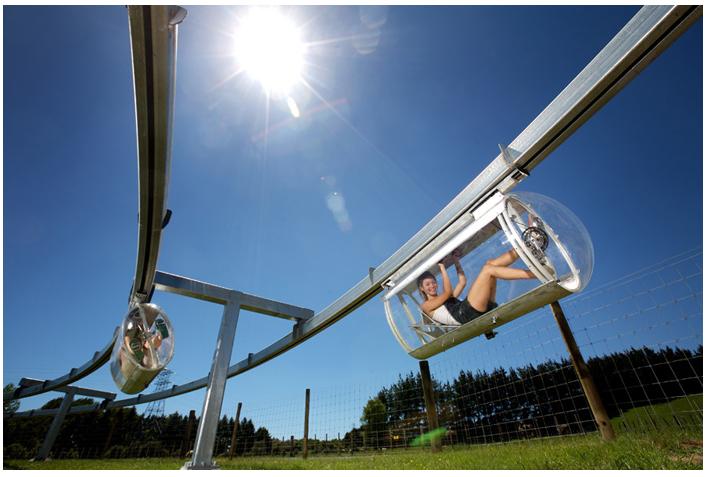 New Zealand has gained a bit of a reputation for developing new ways of getting around while getting a thrill in the process, whether that be using a bungee rope to execute a 140-foot vertical drop off the Kawarau Bridge, or tucking yourself inside a Zorb sphere to roll downhill.

Now, a Kiwi cyclist has developed a human-powered monorail system based around a recumbent bicycle, and a 200-metre track in Rotorua, North Island that showcases the concept is reportedly pulling in crowds of visitors eager to try it out for themselves.

Called the Shweeb – the name is derived from the German verb ‘schweben’, which means ‘to float’ or ‘suspend’ – its inventor, Geoffrey Barnett, hopes that the concept may provide a solution for people looking to get around congested cities.

Mr Barnett hit upon the idea when he was living in Tokyo and worked on the concept for four years before opening the track in Rotorua in 2007.

On the Shweeb website, he explains: “When I lived in Tokyo I cycled through the city to work and on the weekends rode up the mountains around the city. Tokyo, with its frequent and punctual trains, capsule hotels, high population densities, and vending machines, opened my mind to new possibilities.”

Mr Barnett continues: “I came up with the idea of a bicycle monorail network while teaching a class in which the topic for discussion was transport solutions. The idea of riding above the traffic jams on multi-level rails seemed to me the only possible way that Tokyo’s millions of residents could move around the city quickly and safely. It had the added advantages of being environmentally friendly and offering an aerobic workout.”

He concludes: “To me this was a project that I could, if I put my mind to it, make happen.”

If the Shweeb video posted on its website is anything to go by, it’s a lot of fun to use and provides a unique perspective on getting around, even if it does perhaps look a little like something out of a 1950s sci-fi movie, or a James Bond villain’s lair.

Mr Barnett told Reuters: "To me as a cyclist, it's just obvious, you should be able to ride over the top of the traffic, so I came up with the idea of a weather-proof capsule that is completely safe."

He continued: “You jump on, you sit on the recumbent seat – it's very comfortable, it's like sitting at home on your sofa.

“It's got seven gears to play with and it's a lot faster than any other bicycle," Mr Barnett added, saying that it could reach speeds of up to 60kph (35mph).

The designer believes that as well as being a fun tourist attraction, the Shweeb could provide an ideal solution to getting around facilities such as parks and university campuses, and for crossing rivers.

That vision may well be on its way to becoming reality, according to the Shweeb website, which states: “The prototype site has attracted widespread media coverage and global interest. Discussions are currently taking place with a view to delivering the our phase I products of Racetracks, Scenic and A-B links in the near future.”

However, one rider highlighted that it wasn’t an effort-free way of getting round, telling Reuters: "It's really amazing, so exciting but my leg is so sore, I'm so tired."