Speedvagen is a Portland-based company that has been producing bikes since 2007 in the Vanilla Workshop, a collaborative community with framebuilder Sacha White at the heart, and its latest creation is this awesome looking Urban Racer.

The Urban Racer is described by the company as a “super commuter” and is built to accommodate 650b wheels with 42mm tyres. There’s some speculation that the 650b wheelsize, after becoming almost standard in a few shorts years in the mountain bike industry, is set to make an appearance in the road market, especially on gravel and adventure bikes.

The main advantage of the smaller wheels is that you can run much bigger tyres, with the same outside diameter as a skinny tyre on a 700c wheel, but get the comfort benefit from the bigger tyre. That’s obviously an ideal trait in a bike built for traversing rough city roads littered with potholes, as the Urban Racer is.

Made from stainless steel tubing, the Urban Racer has a neat integrated chain guard and is built with a coaster brake, the company choosing it for its “utter lack of complication, leaving you free to focus on building speed and spotting jumps,” and paired with a two-speed internal SRAM gear hub. It's worth pointing out here, that this braking set-up would be illegal on UK roads - where you need two independent means of stopping. Can't help feeling a coaster brake alone is also going to be heavy on the tyres. 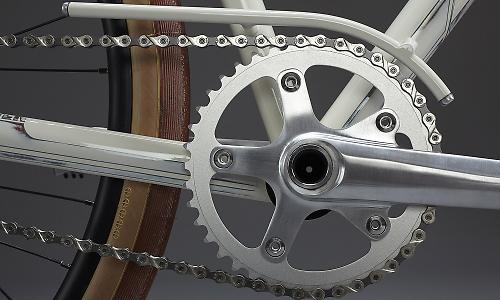 It’s highly likely this bike will be used for commuting so Speedvagen has built a custom rack that attaches to the fork, and is able to hold a bag big enough for a laptop and clothing, or a few groceries. The rack also acts as a useful mount for the Supernova LED light powered by the dynamo front hub.

The pictured bike is fitted with an optional one-piece integrated handlebar and stem, which has been designed and fillet brazed in-house. It’s made from steel and is based on a Nitto handlebar and intended to complement the aesthetic of the complete bike.  Other handlebar and stem options are available as the photos show. The Urban Racer can also be specced with full-length Japanese Honjo mudguards custom painted to match the frame and fork, to provide a seamless appearance.

Check it out in full detail at www.thevanillaworkshop.com/speedvagen-urban-racer/