Subscribe
Back to news
news
Art and design
Innovation
Riding 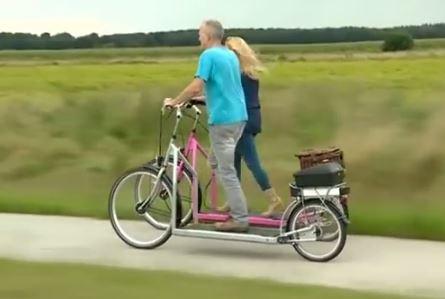 Bruin Bergmeester sits down to work all day, so didn't fancy getting in the saddle ... then he had an idea...
by Simon_MacMichael

A Dutchman who didn’t fancy popping out on his bike to enjoy good weather since he had already been sitting down working all day found a solution that would enable him to get outdoor exercise while standing up - by combining an electric bicycle with a treadmill.

Bruin Bergmeester built the prototype of his invention, called the Lopifit, in his living room in the evenings and weekends.

Here’s how it works, according to the product’s website: “The Lopifit is a totally new way of moving. With the electric assist it takes no more effort to walk then ‘a walk in the park’. The electric assist in combination with the gear is boosting your walking pace up to the speed of a regular bike.

“When you are walking on the Lopifit, you push the treadmill backwards with your feet. A sensor is registering the movement off the treadmill and gives a signal to an electronic device which will activate the motor. The motor now supports you to continue the walking movement.

“Using the brake will shut off the motor immediately. If you are going downhill, a freewheel function is activated.”

Available in five colours, the Lopifit has a claimed range of 55km and is currently being sold online for a discounted price of 1,899 euro.

Here he is talking about his invention in a Dutch TV report from last year in which his wife admits she was initially sceptical about his idea, although all the family seems to have bought into it now.

Bergmeester said: “On rare occasions some people would really laugh at me, but then I would think, ‘I can’t really blame you, it does look a bit odd.’ And some people would just start up a conversation, they want to find out more about it.”

It’s not the first time wheels have been added to a treadmill to create personal transport.

In 2007, Alex Astilean, Romania-born former athlete and personal trainer to stars including Cindy Crawford, showcased his SpeedFit invention in this YouTube video.

The East Hampton-based entrepreneur apparently had big ideas for it, seeing it as having a potential application in mass transit – imagine, if you will, a number of people all running on it simultaneously.

He claimed it could be capable of speeds of between 30 and 40mph, saying: “The Speedmobile is powered exclusive by human force which is transferred far more naturally than the bike motion to a gear box multiplying more than 20 times your footstep,” suggesting it could be used for short commutes or running errands.

"Some people will have uses for things that others never would have thought of. If they didn't, we wouldn't have inventors.

He added: "Most ideas are probably just not dumb but unrealistic for the time being if they fail."