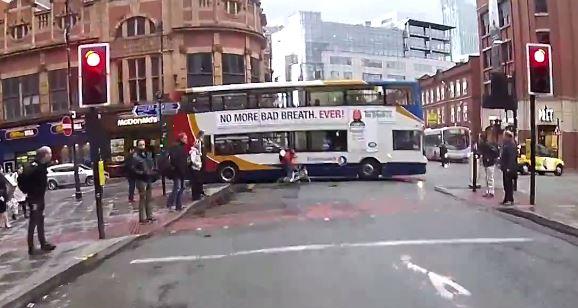 The driver of a Manchester bus that a cyclist ran into the side of after going through a red light has defended the rider’s actions after the latter said that his brake cable had snapped.

He also said that contrary to what the motorbike rider who filmed the incident said, he had been aware of what had happened and stopped his double decker after the incident last week to go back and check that the cyclist was okay.

In case you missed it, here's the video.

In a message posted on the Facebook page of the Manchester Evening News, he wrote:  “I was the driver of the bus and just to let everyone know I parked just round the corner and ran back.

“The cyclist was very lucky and only suffered a cut to one of his knuckles. Also in the cyclist’s defence his brake cable snapped and he couldn’t stop.”

He added: “Scariest thing that ever happened to me.”

In a comment to the YouTube video of the incident, which took place at the junction of Portland Street and Oxford Street, the cyclist said: “It was me. Thought I’d just get the lights, hence the speed.

“Realised it wasn’t happening, squeezed the front brake. Cable snapped. Not enough time to lose speed on back wheel in the wet. Not fun.”

He went on: “It’s a fixed back wheel, front brake for urgent braking, pushing back on the pedals gives you controlled but sadly slower braking with the back wheel, so what you see is me pushing back as hard as I can but it’s a crap bit of road surface and it was wet.”

By law, bikes ridden on the road in the UK need to have a front and rear braking system, which this cyclist’s bike would satisfy.

But this incident does highlight that if you are riding fixed and your front brake suffers some kind of catastrophic failure, your ability to avoid trouble is going to largely depend on the power you can push back in to the pedals and your ability to control a skid.

That said, the latter is likely to apply if you are using a conventional braking set-up too, and fixie riders will no doubt argue that they have plenty of experience when it comes to skidding.

Others of course might argue that this wouldn't have happened if the rider had been running disc brakes. Probably.