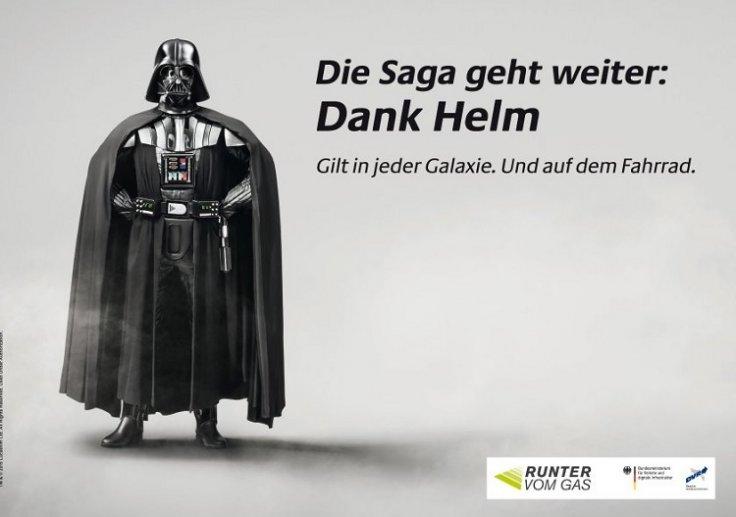 Star Wars villain Darth Vader – perhaps the best-known helmet-wearer in cinematic history –  is being used by the German government in an initiative aimed at getting more people to wear one while riding a bike.

The campaign sees the character, who made his debut in the original Star Wars film in 1977, appear on billboards in Berlin, Cologne and Munich, reports the International Business Times.

Permission was secured to use his image free of charge from Disney Film, Disney International and LucasFilm International, it adds.

Launched in a year when the first sequel to the original three films in the franchise is scheduled for release, the posters carry the strapline: "The saga continues: Thanks to the helmet. Applies in each galaxy. And on the bike."

According to 2014 research cited by the government, while 69 per cent of German children aged between six and 10 wear a helmet while cycling, that falls to just 7 per cent of those aged 17 to 30.

It’s not the first time there has been a connection between Darth Vader and a road safety campaign.

Bristol-born Dave Prowse was the man inside the iconic black costume for the original Star Wars trilogy, although the part was voiced by the American actor James Earl Jones, and when his face was eventually revealed, that scene was played by Britain’s Sebastian Shaw.

Carrie Fisher, who played Princess Leia, later revealed that Prowse’s West Country accent led to him being nicknamed ‘Darth Farmer’ by the cast and crew of the films, which were released between 1977 and 1983.

During the same period, the weightlifter-turned-actor also appeared on British television in a series of public information films as the Green Cross Code man, teaching children how to cross the road safely – his involvement with the campaign leading to him being awarded an MBE.

The 79-year-old, who has severe arthritis and has overcome prostate cancer, reprised that role last year for Road Safety Week in a campaign aimed at adults distracted while crossing the road due to listening to music or using their smartphones.