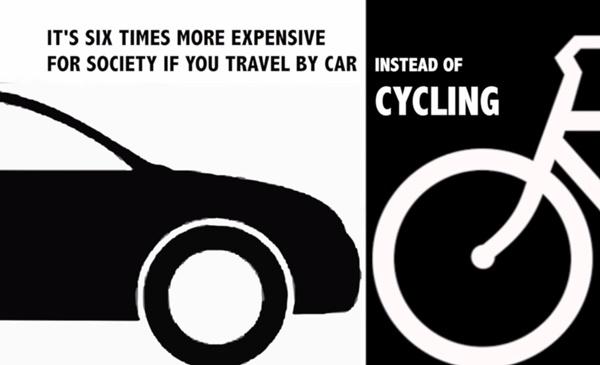 If you combine the cost to society with the cost to the individual, a car is six times as expensive as a bike. That is the finding of a study carried out by Stefan Gössling from Lund University and Andy S Choi from the University of Queensland who have investigated a cost-benefit analysis used by Copenhagen Municipality to determine whether new cycling infrastructure should be built.

The Lund University study looked at how cars compare to bicycles in terms of air pollution, climate change, travel route, noise, road wear, health and congestion in Copenhagen. The researchers found that if the costs to society and the costs to private individuals are added together, the impact of the car is EUR 0.50 per kilometre, while the impact of the bicycle is EUR 0.08 per kilometre.

Cycle infrastructure projects often draw questions regarding their public funding, but after reviewing the cost-benefit framework developed in Copenhagen, it was found that each kilometre travelled by car incurs a cost to society, whereas every kilometre cycled does not. The researchers found that one kilometre by car costs EUR 0.15, whereas society actually earns EUR 0.16 for every kilometre cycled. On top of this, it was concluded that the cost of car driving is only likely to increase in the future, whereas the cost of cycling appears to be declining.

"The cost-benefit analysis in Copenhagen shows that investments in cycling infrastructure and bike-friendly policies are economically sustainable and give high returns", said Gössling.

According to a recent report from the Organisation for Economic Co-operation and Development (OECD), the true impact of running a car is not reflected in the cost, and that even worse, with continuing urban sprawl, people are actually being given an incentive to drive. The report advocated 'setting a realistic carbon price' – by which it meant higher taxes on driving into a city so as to account for air pollution and congestion.