The replacement of Eric Pickles with MP Greg Clark as head of the Department for Communities and Local Government (DCLG) could be a beacon of hope for cycling, say campaigners.

In David Cameron's new Conservative majority government Clark replaces Pickles, who was widely criticised for his pro-car stance and relaxation of town centre parking restrictions, once famously saying on a visit to Cambridge that cycling favoured the "elite".

New DCLG secretary of state, Clark has shown his pro-cycling colours in the past, having spearheaded a campaign to increase cycling levels in his Tunbridge Wells constituency in 2013. 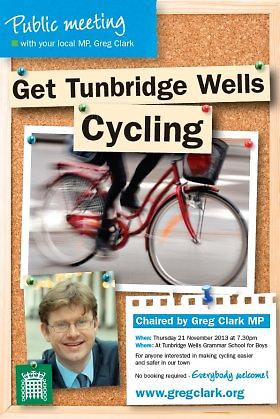 Ralph Smyth, transport campaign manager at Campaign to Protect Rural England (CPRE), is cautiously optimistic about Clark's appointment. He said: "I don't want to over egg the pudding by saying he's going to challenge parking because there will be a backlash, but [Clark] has championed cycling in his local area, which is bound to mean a different approach - a better approach."

Smyth says Clark is a big train and cycling fan who has championed better cycling provision in new developments. He hopes this will continue in Clark's new role, especially in large house building schemes.

He said: "We would like to see better planning guidance that helps build in high rates of walking and cycling. There are lot of towns that are having  huge amounts of housing chucked in, and it makes sense to get people in those new homes cycling."

"A lot of housing developments a lot of residents oppose because there is a fear of lots more traffic. If you build in Dutch style cycle infrastructure you won't have the extra cost of expanding road capacity."

The Department for Communities and Local Government is a planning inspectorate with powers to shape road schemes and new developments. Under Pickles' tenure, a series of measures were green lighted to make parking in towns easier, as well as major road schemes, which were criticised for making cycling less attractive, including the removal of the only cycle route across the river on a major road in Maidstone.

In the past Clark has said he wanted to see more cycle lanes in Tunbridge Wells, and to make the roads safer so more people feel comfortable on bikes, including kids cycling to school.

The CTC's Sam Jones said: "We already know Clark is better for cycling than Pickles, as he has been quite active with the Tunbridge Wells Bicycle User Group in the past."

During the general election David Cameron signed up to Vote Bike, including a pledge to  support the creation of consistently high design standards for cycling in all highway and traffic schemes, new developments and planned road maintenance work.

A review of planning system works for cycling is on the cards as part of the draft Cycling Delivery Plan (CDP), released to general dismay last year hours before a long-planned debate on cycling was tabled in the Commons following the Get Britain Cycling report.

Jones said: "We feared the review mentioned in the draft CDP would be a token review under Pickles but the chance of it being worthwhile is much more promising under Clark."