Not happy with the way your pedalling action feels? A new pedal design just launched on Kickstarter aims to improve comfort by adding an extra degree of freedom of motion.

When clipless pedals were first popularised by Look back in the 1980s some riders soon discovered that having their feet rigidly fixed in place didn't work for them as they developed knee issues. Rotational movement, or float, first in Time pedals and then in others solved that problem by allowing some freedom of movement.

Now Dutch engineering group TSG, which owns Edco components, has come up with a pedal that allows your feet to move sideways on an arc. TSG claims the 3ax design (pronounced try-axe) is more physiologically efficient as well as providing a more comfortable pedalling action. 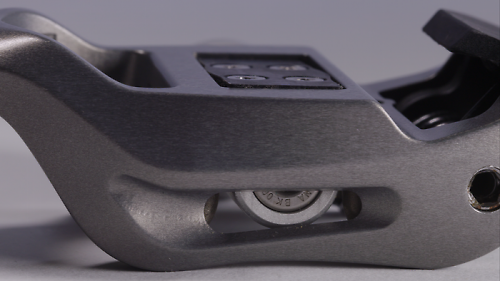 The claim is that in lab tests, riders using 3ax pedals used on average 3.3% less oxygen at a power output of 2.5 watts/kg of rider bodyweight. The implication is that if you're using less oxygen your body is working more efficiently.

Biomechanical studies at the University of Applied Sciences in The Hague found that the pedals reduced sideways knee movement while pedalling, TSG says, which should be another advantage.

Explaining the origin of the pedals, TSG says on its Kickstarter page: "There's one thing [about cycling] we never really liked: clipless pedals, no matter how many we tried. They all seemed to be designed for a machine, not for humans. At least not for those 96% who have a tendency to tilt their feet.

"The evolution of road bikes over the last decades has been really impressive (lighter materials, better bike fitting, improved electronics), and we just felt pedals were lagging. It's such a crucial part for optimum power transfer, so we set ourselves the goal to build the best pedal possible."

As you can see from the video below, 3ax pedals allow the feet to move sideways on a slight arc.

However, it's not clear if this is necessary. One high-regarded bike fit specialist who has looked at the design told us: "We got left a pair these pedals so we could evaluate them. I didn’t really understand what they are trying to achieve and still don’t if I am honest.

"I would need to see some research underpinning as to why the foot is being canted as the Q increases. There maybe something here but biomechanical justification seems scant."

The pedals were originally announced last year as Edco 3ax Sway pedals. Heres the original promo video from back then

Given the time these pedals have been in development and the fact that TSG says they have had a 30-strong team working on them it's slightly puzzling that they're looking for a mere $50,000 from Kickstarter.

We've asked, and if TSG get back to us, we'll let you know.