The top-dollar 9000 Ltd build weighs in at just 4.55kg; team riders will use a heavier frame though
by Mat Brett

Merida has redesigned its Scultura road bike to be both lightweight and aerodynamically efficient and the brand claims that at 4.55kg its new Scultura 9000 Ltd is the lightest production bike in the world.

This is the fourth generation Scultura, the last one having been released in 2012. Last year, though, it seemed that Merida were putting all their eggs into the Reacto basket as far as high-end road race bikes were concerned, with the Ride being offered as an alternative for those wanting an endurance option. It was starting to look like the Scultura would be quietly pushed to one side and eventually retired.

Now, though, the Scultura is back: lighter than ever, and with aero features to boot.

Juergen Falke, Merida’s Director of Products, says that they had several objectives for the new Scultura:

• Retain the stiffness of the previous version
• Improve the compliance for more comfort
• Maintain the aggressive handling
• A 730g frame weight and 1,000g frameset weight
• Improved aerodynamics
• Allow the use of 25mm tyres – the previous model allowed a maximum of 23mm

Merida wanted the new Scultura to be an extremely light bike – something to compete with the likes of the Cannondale SuperSix Evo, Trek Émonda, Scott Addict, Cervelo R5, Specialized S-Works Tarmac, Focus Izalco, Canyon SLX… You know, the really light bikes out there.

The new Scultura initially comes in two versions: a Team model with a frame that weighs 750g and a superlight Scultura 9000 version that is 70-90g lighter. As the name implies, the Lampre-Merida pro riders will pilot the slightly heavier Team version. Why? Because they have to ride bikes weighing at least 6.8kg and that’s easily achievable on the Team version, plus the superlight version is 15-20% less stiff, according to Merida. On top of that, pro teams put their bikes through a lot, including clamping them for long hours on the top of cars, and a lighter frame is generally going to be more prone to getting damaged.

Falke seems to think that the Team version is the perfect model and that they’ve really only produced the superlight one to prove that it can be done.

“We are convinced that frame weights of below 750g mark the border of current carbon frame manufacturing technology under serial-production aspects,” he said. Anything lighter than that, he says, has to be made in lab conditions.

So, how have Merida made the Scultura so light? Well, they’ve used 400 prepreg pieces and alternative fibre materials to make each finished frame, putting the strength (and weight) only where it’s needed for performance. The wall thicknesses are as low as 0.4mm. Merida reckon the layup process is so complicated that it takes somewhere from 11 to 15 hours to produce each frame. 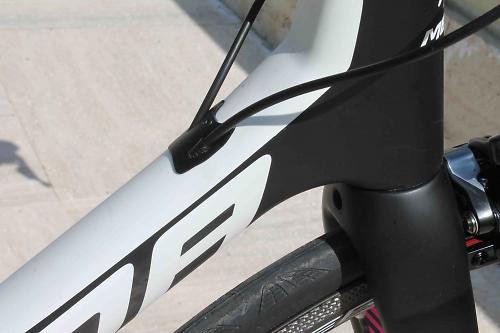 Merida have also gone for a pro-rider geometry on the new generation Scultura and that means a short head tube, leading to a slight weight saving. Previously, the Lampre riders had tended to take a bike a size smaller than Merida had anticipated just so they could get a low front end. This meant the riders had to use super-long stems – 140mm and 150mm being common – to get the reach they were after, affecting the handing.

Merida acknowledge that the previous generation Scultura was not very aerodynamically efficient. Aerodynamics wasn’t an issue that was on the design team’s radar. These days, though, aero is everything in the pro peloton. So Merida used the usual weapons of CFD and the wind tunnel (including a dummy with moving legs) to come up with a more slippery design.

The tube cross sections are based on NACA0028 airfoil wing profile with a fastback trailing edge. In other words, the back of the airfoil profile has been chopped off square instead of trailing away gradually, the idea being to keep the airflow consistent without causing much turbulence. This also saves a significant amount of weight.

Merida has used the same trick on its Reacto, although the Scultura’s tube profiles are cut off shorter than those of the Reacto to save extra weight. 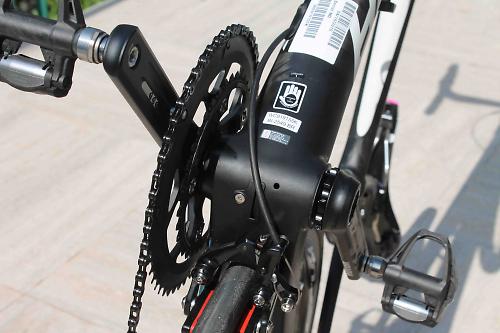 It’s not just the tube shaping; the new Scultura boasts other aero features including a direct-mount rear brake positioned beneath/behind the bottom bracket, a front derailleur and rear brake cable guide underneath the bottom bracket, and the lack of any connecting bridge between the seatstays. The 1 1/2in fork crown bearing has been slimmed down to a 1 1/4in one to shave a bit of frontal area.

The new Scultura is lighter than the Reacto and Merida claim it'll be more comfortable too. Organic flax fibres are laminated between the individual carbon layers, something Merida calls 'Bio Fibre Damping Compound' technology. These fibres filter high frequency vibrations and are a technology Merida have used before.

The Scultura is not quite as stiff as the Reacto, and not quite as aero, and for those reasons the Reacto is still the standard bike for Lampre-Merida. The good aerodynamics and high stiffness at both the bottom bracket and the head tube really matter to the pros. The Scultura will be used more in hilly stages where aero advantage isn't so much of an issue.

Tomorrow I'll be slinging my leg over one of the new bikes, the Scultura Team. It's a 6.6kg bike with Dura Ace Di2 and the brand spanking new Fulcrum Racing Zero carbon wheelset. That's the team issue spec, so check back for our first impressions.

We don't have UK pricing on these new bikes yet. They're not going to be cheap, mind, especially not the superlight one. Delivery is expected during the summer.