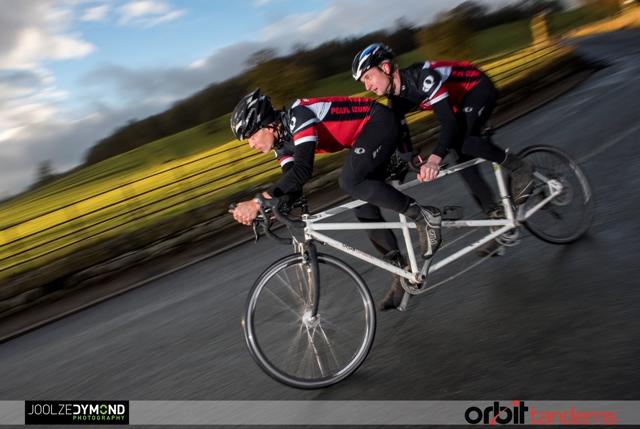 "Never take your leg off the bike," says triumphant tandemist...
by John Stevenson

When I catch up with him on the phone, the afternoon after finishing his and Charlie Mitchell's successful attempt on the Land's End to John O'Groats tandem record, Dominic Irvine is "a bit sore" after 45 hours in the saddle. He's also jubilant, finally having cracked a record that he's attempted twice before.

Between 6:30 am on Tuesday and the small hours of this morning, Irvine and Mitchell covered the 842 miles between Land's End and ohn O'Groats in 45 hours, 11 minutes and 2 seconds, smashing the previous record of 50 hours, 14 minutes and 25 seconds set by Pete Swinden and John Withers in 1966.

For anyone watching their progress the most remarkable thing about the ride was the blistering pace of the first couple of hundred miles as they stormed up through the West Country.

"We got lucky with that howling tailwind," says Irvine. "We set off with the intention of staying at L2 power level, but we realised this was too good an opportunity to miss so we did our best to keep going as long as we could with that wind giving us a bit of a boost."

After that high-speed start, and a similarly scorching first half of the ride, things got tough when they hit the Cairngorms and the wind changed.

Irvine says: "You're grinding over the Cairngorm plateau, battling a headwind thinking 'If we don't get some speed up, we're stuffed. This might not happen at all now'."

They weren't certain they were going to break the record, then, until the last moment. "For both of us, it was when our wheel crosses the finish line, then we've done it, but until then we were just keeping going, keeping focussed, riding the best we can."

There were physical highs and lows as well as psychological ones and both Irvine and Mitchell got sick while on the bike.

"That comes with the territory. You work out how to fix things, work with the crew to fix it, then you come out the other side and you're on to the next challenge,"

Although they weren't counting chickens, the point a couple of hundred miles in when they'd covered almost 200 miles in eight hours was a high point for the duo.

And they did more than get a sniff, taking five hours off a record that had stood since 1966.

On the way they never stopped for more than ten minutes, and Irvine thinks they spent no more than 30 minutes in total stationary.

They did often stop and get off the bike for another reason though: to swap places.

Usually one rider on a tandem will handle the steering, the other will simply pedal, but Irvine and Mitchell are the same size and bike fit, so could swap the roles of captain and stoker.

That was a big advantage, says Irvine.

"It meant the person on the front could get aero and stay aero then the moment they started to get tired and wanted to sit up, at a red traffic light that was enough time to unclip, jump back on again and go. That worked brilliantly for us."

Irvine says he's nothing special as a rider, but has the ability to thoroughly think through the obstacles that have to be surmounted for a record like this. But he's full of praise for previous record holders Pete Swinden and John Withers.

"I think those guys when they set that record were really, really good tandem riders," he says. "They were a great team and they'd trained for about four or five years. When they broke the record that was their second attempt and they broke it even though they spent about an hour in Inverness hospital with one of then getting his knee injected because of the pain he was experiencing.

"They were amazing riders, really, really good and that's why their record stood for so long."

Listen to the whole interview here: