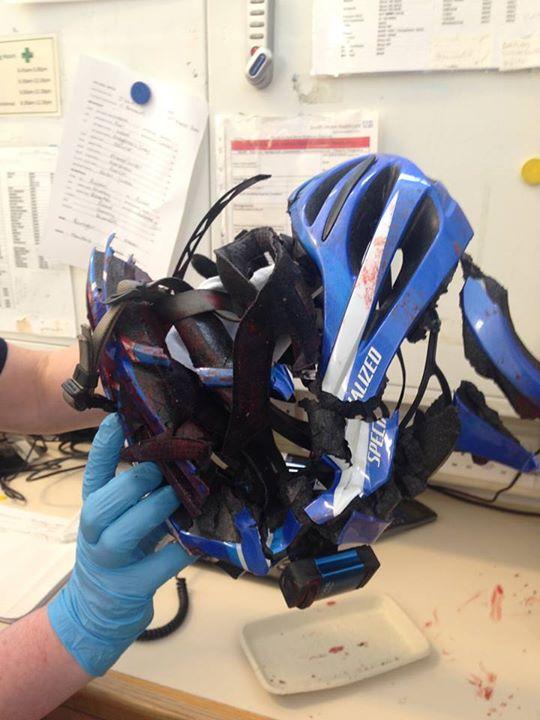 Ben Hobbs was hit by recycling truck but had miraculous escape - thanks, he says, to helmet
by Sarah Barth

A cyclist who was run down by a recycling truck and narrowly avoided being killed has said a shared a graphic photo online of his mangled helmet online could warn others of the dangers of riding without one.

Ben Hobbs, 46, was riding to work near his home in Devon in March when he was hit by the truck. He was knocked off and suffered a broken spine, broken ribs, broken sternum and a head injury.

The photo of the Specialized Echelon helmet has since been shared more than 30 million times and sparked intense debate online.

He told the Western Daily News: "It's quite surprising that the image has had such an impact. It has been shared around the county and I'm really grateful for that.

"I've heard cyclists say that helmets are not the be all and end all because they only cover certain places but the helmet certainly worked for me."

He said: "I don't know what speed I was going at when the driver cut across in front of me but I didn't have time to stop.

"I was on my way to work and it was about 9am when the accident happened. There were a few people who stopped to help and a fantastic first aider who had to stop me from trying to get up.

"People kept telling me that I was in a mess but I didn't know what was going on. I kept trying to get up and I didn't know I had a serious spinal injury.

"I don't remember much but the first thing I can clearly remember is being in the ambulance. In the hospital I still didn't accept that it had happened to me and kept trying to get out of bed in the night.

"By day three a nurse sat down with me and said you've broken your back and you need to stay in bed."

The father of two is still recovering rom his injuries at home.

He said: "My head injury was right on the top of my head. The helmet has done the job for me.

"I'm a good rider and I'm confident. Nothing like this has happened to me before and I've been riding since I was four or five.

"I ride about 6,000 miles a year in Devon and commute to work everyday which is about 13 miles. I had just finished doing a complete overhaul of my bike and it was in 100 per cent condition.

"You've got no control of what will happen when you are on the roads. As a cyclist I make a balanced decision and go by the theory that you need to expect the unexpected. You don't know what people are going to do."

Mark Walker, a first responder for South Western Ambulance Service, shared the photo on his Facebook page after he was sent it by a colleague.

He said: "He is a lucky man. If it had been his head that had hit the van he wouldn't be here today. He was wearing the helmet in the correct position and it took the pressure of the impact.

"This is a powerful image and that shows the importance of wearing a helmet when cycling on the road."