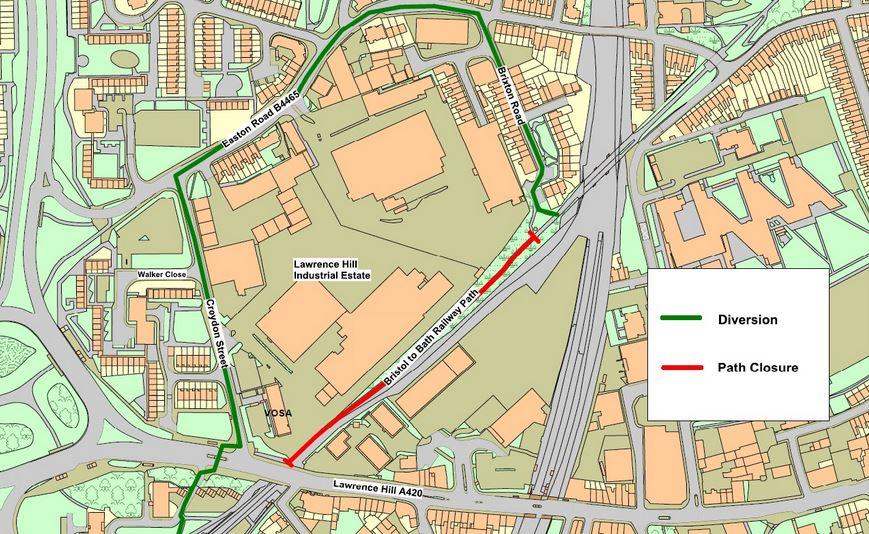 As one part of Bristol & Bath Railway Path reopens, another is closed for widening

A section of the Bristol & Bath Railway Path that has been closed since October while a bridge was widened will be reopened at the start of May – around five months behind schedule. However, another section of the route, in central Bristol, is now set to be closed for 10 weeks.

Part of what is one of Britain’s busiest traffic-free cycle routes at Teewell Hill in South Gloucestershire was closed on 6 October to allow the works to be carried out, with cyclists having to take a diversion.

Originally the closure was anticipated to last six weeks, but as we reported in January, the work associated with widening the road bridge running over the path was taking longer than anticipated.

South Gloucestershire Council has now confirmed that the path, which had been blocked off on safety grounds due to the construction works, will reopen to cyclists and walkers from Friday 1 May.

However it added that some work still needs to be carried out and will result in additional temporary closures “lasting a day or less.”

The council’s head of street care and transport, Mark King, said: “The railway path will reopen in time for the first May bank holiday weekend ensuring cyclists and walkers will be able to use the route for leisure or as part of their commute.

“We do apologise for any inconvenience caused while these essential works have been carried out and thank residents for their patience throughout the extended closure.

“Before we can reopen the path on 1 May there is still some remaining work to complete the new arch above the path, cap the piling, and carry out maintenance to the old masonry arch.

“When this has been completed the path will be cleaned and tidied and the fencing will be re-positioned.

“Additional work to complete the bridge widening improvements will continue over the next three months which will require short term closures from time to time.

“Any such closures will be clearly signposted in advance and we will keep residents notified via our website and social media,” he added.

The council also took the opportunity of the closure to conduct maintenance work at Staple Hill tunnel, which the path runs through, such as repointing the arch and airshafts.

On Friday, as South Gloucestershire Council announced the reopening of that stretch of the path, Bristol City Council revealed that another section would be closed for 10 weeks for an £80,000 project to widen it.

The works, which were due to start today, are being carried out with money from the Department for Transport’s Local Sustainable Transport Fund.

The land allowing the path to be extended from 2 to 4 metres in width is being donated by the Driver & Vehicle Standards Agency, which operates from the adjacent Berkeley House.

A diversion has been put in place along Croydon Road, Easton Road and Brixton Street, as shown in the picture above with a larger version available here.

Earlier this month, Bristol Cycling Campaign criticised the council for what it called a “piecemeal” approach to infrastructure.

However, Bristol’s mayor, George Ferguson, said: “This is yet another example of the work we are doing to improve cycling infrastructure across the city with funding won from central government.

“The Bristol to Bath Cycle Path is an extremely popular route for both commuters and people cycling for pleasure, as well as pedestrians, and this work will really help to make the path a more enjoyable experience for everyone,” he added.

Mark Bradshaw, assistant mayor for transport, said: “I back this scheme to improve capacity and safety on a hugely popular route for cycling and walking.

“We are keen to improve existing routes, address missing links between destinations and create completely new corridors to encourage more people to take up active independent travel - it's a healthy and congestion-busting approach to getting around Bristol."