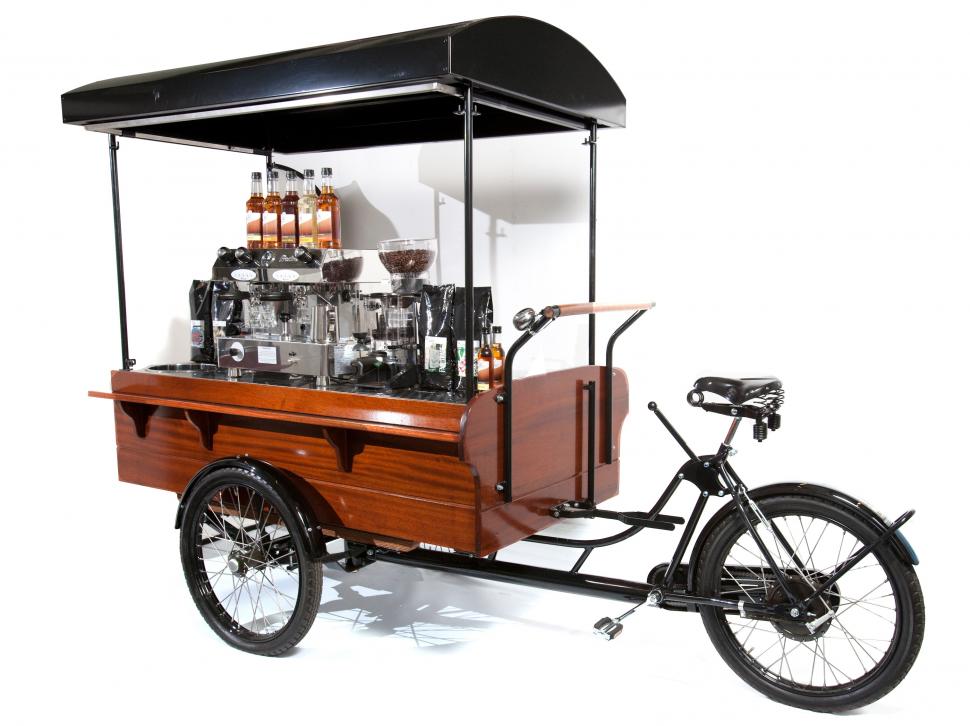 Got a spare ten grand? You could set up on your own
by John Stevenson

Fancy a job pedalling a tricycle coffee cart along the Wales Coast Path, doubling up as barista and tourist information service? A role patrolling the path between Rhyl and Old Colwyn has attracted a record number of applications.

Despite only publicising the job via word of mouth and local media, Groundwork has had 40 applicants fo the gig, a record for the organisation.

Anna Pollard, from Groundwork North Wales told the Daily Post: "We have had over 40 applicants which is quite a record for us as we don’t do any paid advertising for our jobs.

"This will ensure we are able to choose the right candidate and we are now interviewing at the end of the month and will later launch the service."

The job pays £17,300 per year and will involve riding up to five miles a day.

If you fancy setting up on your own as a pedalling barista, we know of two sources of pedal-powered mobile coffee stations in the UK.

The trike pictured above comes from OnYourTrike.com and will set you back £10,999, ready to roll out and start pulling shots.

Velopresso's coffee trike, below, is slightly more compact and designed so you can stay in the saddle while making coffees. It incorporates a pedal-powered grinder and will set you back £9,995. The association of cycling and everyone's favourite legal stimulant is nothing new, but businesses combining coffee and cycling have been popping up like mushrooms after rain in recent months.

BikeBiz recently reported that Pinarello-stockist Bicicielo of central Birmingham has converted a till station build-out into a bar for a coffee shop.

At perhaps the other end of the spectrum between espresso bar and bike shop, Cambridge coffee shop Espresso Library recently opened with indoor bike parking.

Crossing the streams, Bicicletta Coffee con Velo in Saffrom Walden opened on April 1, combining a cafe with a bike shop focussing on clothing and high-end bikes.

It's starting to feel like there's no need to ever ride more than five miles between coffee/bike shops.

1
Times latest newspaper accused of trying to shame cyclists with dodgy telephoto pics
2
Full Kit Ranker quarter finals: your chance to vote for the greatest cycling jersey of all time
3
Luke Rowe buys new bike for Cardiff doctor whose bike was stolen
4
Updated: Health secretary says no plans to ban cycling and other exercise - after suggesting earlier that it might be
5
Giant launch 2021 TCR Advanced – the “fastest TCR ever”
6
Ribble releases Endurance Ti Disc road bike
7
Campaigners call for reversal of Richmond Park cycling ban – and so does Jeremy Vine
8
Don't mess it up! As warm weekend looms, cyclists reminded to ride responsibly