Response to consultation says shared use paths won't cope with expected volumes of people on foot or bike...
by Simon_MacMichael

Cycling campaigners in Bristol have described plans for a shared use path for bike riders and pedestrians to the city’s planned £91 million arena as “awful,” and that provision for cyclists in the city is “piecemeal” and appears to be drawn up as an afterthought.

The routes in question, known as Temple Greenways, will provide a link from Temple Quay to the city centre in the area around Temple Meads station, which is being transformed as part of a massive regeneration project.

Bristol City Council believes the proposed network of paths, which form part of a £21 million scheme to improve transport, walking and cycling provision in the area, will encourage people to visit the 12,000 capacity venue by bike and on foot.

But in their response to a consultation which closed last Friday, Bristol Cycling Campaign said that while there were positive aspects to the proposals, issues such as more bike parking remained unmet, and that due to expected volumes, it was vital to separate pedestrians from cyclists.

They said: While both sets of plans show some innovation and welcome improvements, for example on the Promenade Quietway and a riverside path on pontoons, they also show a failure to tackle the fundamental issues and barriers, such as linking the Bath Road Freeway into the centre, or the 6,000 space cycling hub that is needed at this key transport interchange.

“We think that recent plans for cycling are so awful because they continue to throw in piecemeal routes after all major decisions have been made, and then most of them are for shared use with pedestrians.

“There is only one section of separated Space for Cycling in these plans, and that's the existing short Cattle Market Road section. Everything else is shared use with pedestrians which is only suitable when volumes and speeds are low.

“These routes will be some of the most heavily used in the city as we move towards the 20 per cent level of cycling that the Bristol Cycle Strategy is aiming for. We can expect walking to comfortably exceed 40 per cent of trips making clearly separated networks for walking and cycling essential,” they added.

Launching the consultation last month, assistant mayor Mark Bradshaw said: “The streets and spaces around Bristol Temple Quarter Enterprise Zone need to be improved to meet the needs of the growing number of people who will live and work here and visit the area.

“With the arrival of the Bristol Arena in 2017, improved cycle and pedestrian routes to the arena site and good links to the station are vital to encourage visitors to travel to the venue sustainably.

“We want moving around Temple Quarter to be an easy and pleasant experience and for streets and spaces to be safe, welcoming and attractive,” he added.

The overall plan is shown below – click here for a full-size PDF. 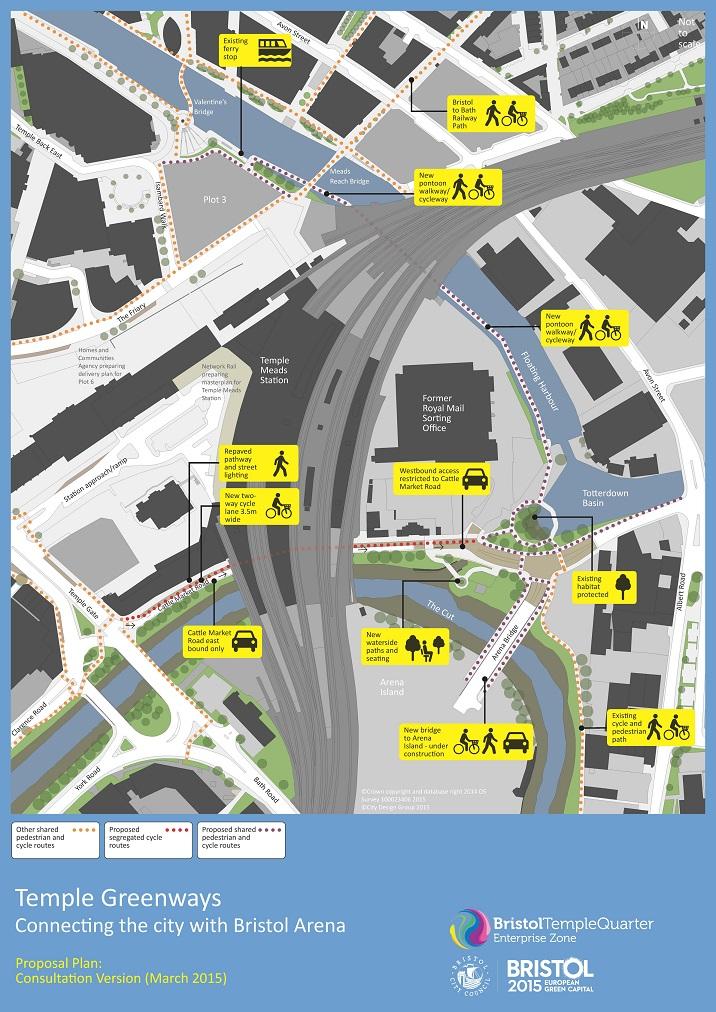 1
Rapha undergoes refinancing operation to write off debt but says it “far outperformed” rivals in 2022
2
Near Miss of the Day 848: An overtake worthy of the 'must get in front' title
3
Judge tells man who "played the system" after dangerous driving killed two young boys to expect "very significant sentence"
4
Near Miss of the Day 847: Careless caravan close call causes cyclists concern
5
Mavic launches the Cosmic Ultimate as “lightest wheelset in its category”
6
You've heard of a coffee ride - now Canyon uses real arabica coffee for new Speedmax CF SLX finish
7
Murder suspect in deaths of father and son killed while cycling released on bail
8
Large vehicle may have crashed into controversial bike hangar, council says