Ford applies for patent for collapsible bike made from car parts

Stuck in traffic? Ford wants you to assemble a bike from parts of your car

There's a theory that some drivers get annoyed with cyclists because while stuck in traffic they envy our freedom keep moving despite congestion. If a patent application from Ford ever goes into production, jammed-in drivers could escape by assembling a bike from parts of their cars.

According to Richard Gray of Mailonline, Ford proposes to incorporate a bike frame in the body of the car, and have the other components do double-duty as car parts.

The car's spare tyre will split to work as the bike's wheels; the jack will mount as the pedals and the saddle will come from one of the headrests. 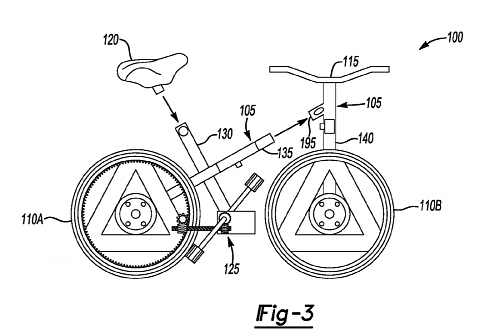 The drawings accompanying the application show at least one other novel feature: a shaft driving the rear wheel at the rim so the bike doesn't need a chain. Shaft drives aren't very efficient, but Ford doesn't seem to anticipate anyone taking off for long rides on the bike. Rather the patent talks about urban parking shortages, implying Ford sees this as a way of getting from a car park on the edge of the city centre to the office.

"A collapsible frame may allow the rider to conveniently store the bicycle in an ultimate destination such as an office," Ford says. Makes sense; having parts of your car stolen by some junkie lowlife would be embarrassing, to say the least. Patent applications tend to be very broad in order to protect the inventor's ideas and Ford has all the bases covered with the section on materials which suggests the frame could be made from "various materials such as steel, aluminum, titanium, carbon fiber, a thermoplastic, magnesium, scandium, beryllium, bamboo, wood, or any combination of these".

As far as we know, scandium has never been used except in some aluminium alloys, and the only beryllium bike frames we've ever seen were trade show attention getters priced at US$26,000. The patent says: "The bicycle includes components that can also be used in a vehicles such as a car, truck or sports utility vehicle.

"The rear wheel and the front wheel may be fixed to one another for use in a spare wheel in a vehicle or separated for use in the bicycle.

"Moreover, the frame may be collapsible so that it may be easily stored in the vehicle when the bicycle is not in use."

In 2013 folding bike maker Dahon announced a partnership with Ford to produce a line of Ford bikes which were due to be launched at the end of 2014.