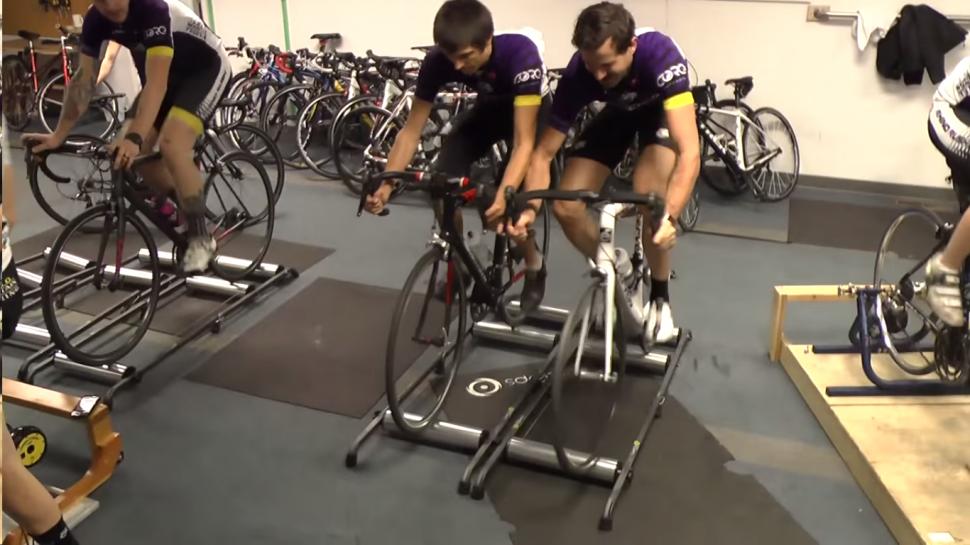 For some of us, riding on rollers is a challenge - now imagine cooking or wrestling on them
by Elliot Johnston

We've got a roller-heavy round-up for you today, plus some musical commuting accompaniment, an insight into the contrasting nature of riding a fixie in Moscow and Berlin, and a fairly brutal crash in a Canadian track meet.

We've got a fair few videos to get through today, so let's tuck straight in to one of the most high-octane uses for rollers that we've ever seen.

Here's something new. Check out the Rhino Rush cycling team practise and compete against one-another on their rollers. A series of skills and challenges culminate in roller battles.

Have a look - the battles include crashes and some pretty good match-ups. We want a go.

Here at road.cc, like many of you we're sure, our Sunday morning rides involve a pit stop to fill up on coffee and breakfast-y treats. Clearly, that process isn't efficient enough for everyone.

This young lady is bringing breakfast on-the-go to a whole new level. Her on-roller control and fearlessness which she demonstrates, both in riding so close to a frying pan and then flipping her eggs as she makes breakfast on her rollers, is admirable - we're not sure we'll be trying it any time soon though.

In many camps cycling with headphones in is a no-no. Of course, there are solutions that allow cyclists to listen to music while riding - whether we're talking about bone conducting headphones, or bar-mounted speakers - one other solution is targetted busking.

This trumpeter gives this female cyclist a brief soundtrack to her trackstand and traffic light restart.

In the Fix - Berlin vs. Moscow

This is the second part of a two-part documentary about fixed gear bikes from online cycling magazine We Love Cycling.

Where the first part looked at what a fixie is and why people ride them, the second part looks at the contrasting cultural and political impact that the fixie has had on two of Europe's busiest cities: Moscow and Berlin.

Over to Canada. This amateur scratch race qualifier in the Ontario-based O-Cup competition ended in quite spectacular fashion for one contestant.

The injured rider allegedly walked away from this incident, after an extended recovery period on the deck. It did make us wonder, though, was that gate supposed to be closed?

Finally, we've got a short but sweetly shot recon ride of the Oregon-based Gorge Roubaix sportive, which covers some spectacular landscapes and gravel roads.