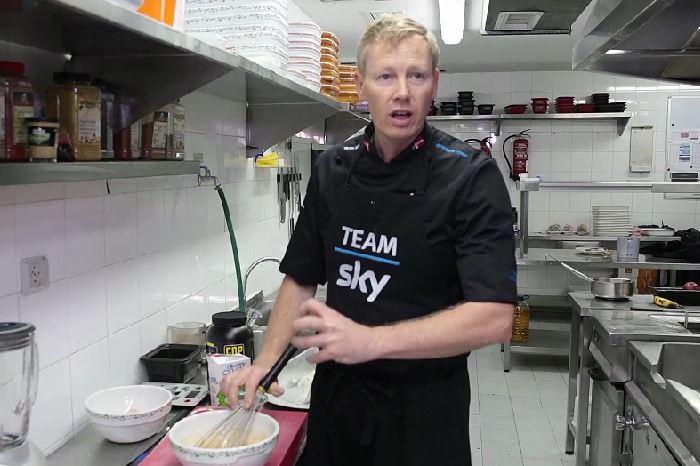 It’s Pancake Day today, and if you thought that pro cyclists might have to shun the pre-Lenten treat, think again – here’s Team Sky chef Søren Kristiansen knocking some up, with ingredients including the magic ingredient of CNP Peptide from the outfit’s nutrition sponsor.

Peptides – short-chain protein that helps build muscle mass – have caught on big time in the sports supplement market in recent years, and are also breaking into the beauty products area, due to claimed anti-aging properties.

Here’s Kristiansen showing how it’s done, and here’s the recipe details on the CNP website; other peptide products are of course available should you prove unable to get your hands on the Sky sponsor’s version this afternoon (or you could just skip that step altogether and have some less performance-enhancing pancakes).

As for toppings, you could do worse than put some Nutella on it in tribute to the family-owned company Ferrero’s patriarch, Michele Ferrero, who died at the age of 89 last week and was a huge supporter of Italian cycling.

Sports nutrition isn’t everyone’s cup of tea, as it were, and there are other ways to get protein – which brings to mind the memorable phrase uttered by the John Cusack character Martin Blank in 1997’s Grosse Point Blank, when a waitress points out that the filling-free egg white omelette he has ordered isn’t, technically, an omelette; “Look, I don't want to get into a semantic argument about it, I just want the protein, all right?”

But if you are a fan of sports supplements and you try out the pancake recipe with peptides included, let us know how it goes in the comments below.