The Radial Revere Carbon 1.1 Apex is a £999.99 road bike from a British brand that has just launched with an extensive lineup that covers a range of different areas of cycling. 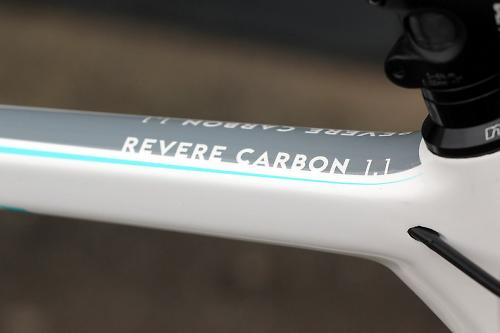 Radial launched at the Milton Keynes round of the Cyclo-Cross World Cup towards the end of last year. Another new bike brand? Because the world needs are a few more, right? Well, it’s certainly a crowded market if not a saturated one, but Radial think they can offer good value by selling direct to the consumer – you and me – in the same way that Canyon, for example, do. 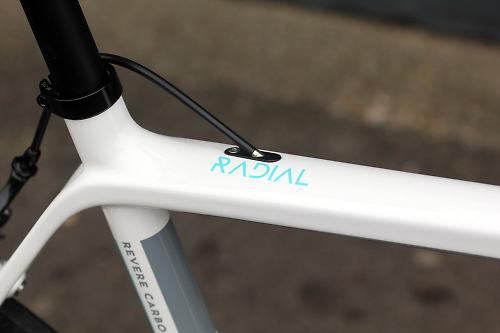 Radial came to visit us at road.cc recently and they were keen to point out that although their bikes are made in Taiwan – there’s nothing unusual about that – they’re designed here in Britain. 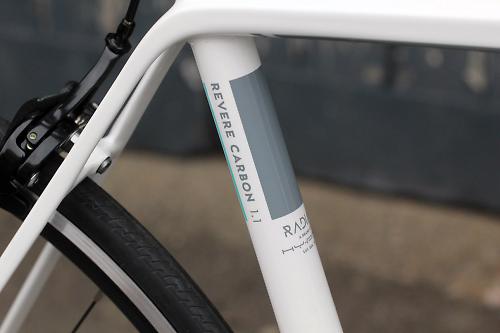 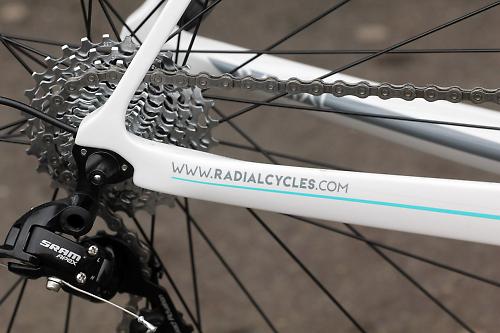 The one we have, the Revere Carbon, is made from Toray carbon-fibre and it’s built to a fairly typical road bike geometry. We have the 55cm model – the Revere Carbon is available in sizes from 47cm (by special order) up to 59cm – that comes with a 555mm effective top tube and a 150mm head tube. That suggests a middling type of ride position; not ultra low and stretched and not particularly sit-up-and-beg. We’ll see for sure when we get the bike out on the road. As is usually the case with performance-orientated road frames these days, the Revere Carbon features a tapered head tube, the upper bearing being 1 1/8in and the lower one being 1 1/2in. The idea, of course, is that the larger area results in increased front-end stiffness. The fork that plugs in there is full carbon.

Like the head tube, the down tube is oversized, leading to a SRAM GXP bottom bracket, and the chainstays are on the meaty side too. In contrast, the wide-sitting seatstays are slim and they meet the very outer edges of the seat tube. 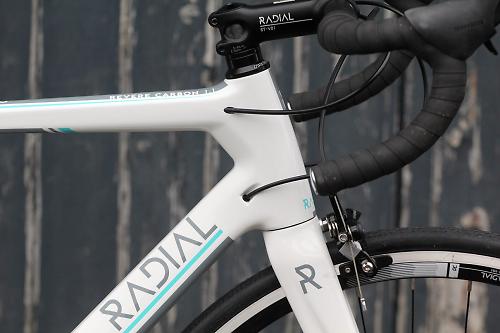 The cabling runs internally through the frame, the rear mech cable exiting right at the end of the chainstay. It’s compatible with electronic shifting if you want to go down that route in the future. Apex is 10-speed, SRAM’s fourth tier road groupset, using the brand’s Double Tap system for gear changes. You push the lever a short distance to shift in one direction and push the same lever further to shift the opposite way. Like any other gear change system out there, you’ll get used to it within a couple of rides if you’re moving from something else. Radial have specced a compact chainset (50-tooth and 34-tooth chainrings) and a super-wide ranging cassette: 11-32-tooth. That means you get a few big jumps between ratios but the lowest gear is really, really small for getting up the longest and steepest climbs. 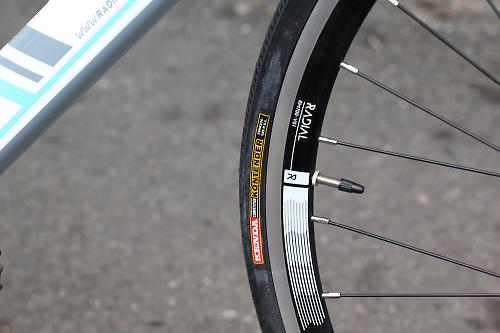 The brakes are from Tektro and the wheels are Radial’s own with 28 holes front and rear, and Kenda tyres. We’ll have a closer look at them when we take the bike out on the road. Much of the rest of the finishing kit comes from Radial’s own range too, including the saddle and the aluminium stem, seatpost and handlebar.

Unusually, the Radial Revere Carbon 1.1 Apex comes with Look Kéo-compatible clipless pedals as standard, along with a pair of cleats. The idea is that the bike is ready to ride straight out of the box; all you need to do is turn the handlebars. The just-under-a-grand bike market is a competitive one because brands know that many people have a psychological hurdle that prevents them spending over £1,000 on a bike. Plus, most Cycle to Work Schemes top out at £1,000 and everyone wants a slice of that tax-free action. 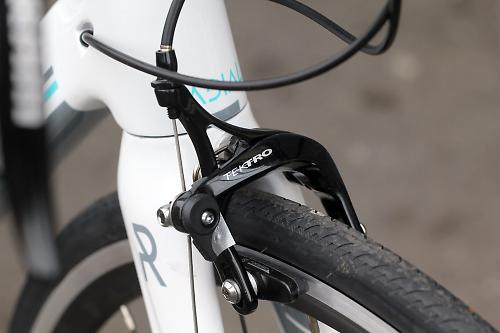 The last bike we reviewed at this price on road.cc was the Kinesis Racelight T2 (£999.99) and it isn’t much like the Radial at all. It is built around an alloy frame and comes with a Shimano Tiagra groupset. The same goes for the Whyte Dorset, although that bike has disc brakes so it’s even less like the Radial.

The £996 Verenti Insight 0.3 that we tested last summer has a carbon-fibre frame and a full Shimano 105 groupset, but that’s unusual for a bike of this price, hence the 10 out of 10 mark for value.

We’ll get this bike out on the road over the next few weeks and be back with a review as soon as we’ve tested it to the limit. In the meantime, head over to www.radialcycles.co.uk for more details.