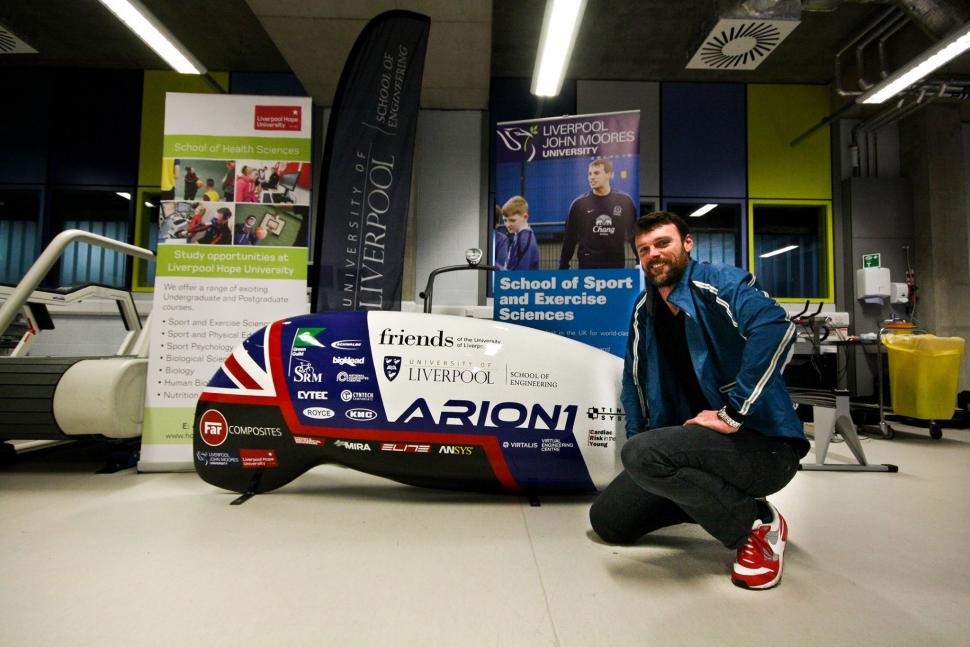 Former world track champion one of three riders selected for assault on men's and women's world speed records this September...
by Simon_MacMichael

Former track world champion Rob Hayles will be one of three pilots of ARION1, which the University of Liverpool hopes will bring it the men's and women's human powered vehicle records later this year.

The ex-pro, aged 42, will be joined at Battle Mountain, Arizona, by Ken Buckley, who works as a direct sales executive in Reading, and acute nurse Natasha Morrison from Kenilworth.

The trio were selected after a testing process run by sports scientists at Liverpool John Moores University which assessed 35 applicants.

“I am delighted to be chosen as one of the riders,” said Hayles. “The testing was rigorous and I can’t wait to start putting into practice the specialist training needed to top the current 83.13 mph record when we compete in the Nevada desert in September.”

The current men’s record, which is equivalent to 133.78 kph, was set in September 2013 by Dutch cyclist Sebastiaan Bowier, riding the VeloX3 recumbent jointly developed by students from the Delft University of Technology and the VU University Amsterdam.

ARION1, currently under construction, has a similar fully-faired design, and is said to be 35 times more aerodynamic than a typical bike, with a 1:17 gear ratio.

The designers’ aim is that following 4.5 miles of acceleration a female rider will be capable of generating 800 watts and a male cyclist 850 watts.

Buckley said: “I’m excited to have been selected as a pilot for the ARION1 project and so grateful for the opportunity to push the boundaries of human performance. Bringing the best of science, engineering and human physiology together is going to produce something really special.

“I’m a small part of the puzzle and it’s the guys creating the machine that have the toughest job ahead. They’re putting incredible amounts of effort into this project and analysing every last detail of the bike,” he added.

Meanwhile Morrison’s target is the female record, which currently stands at 75.69 mph, set by France’s Barbara Buatois in 2010.

She said: “I have three passions in life, one of which is cycling. To each I apply my personal proverb – aim high then work even harder. The ARION1 project is a really exciting chance for me to push to the extremes and fulfil my proverb.”

All three riders will now follow a personalised training plan and will undergo monitoring at intervals of between four and six weeks from now until September.

Patrick Harper, lead ergonomics engineer and commercial manager of the University of Liverpool’s Velocipede Team said: “Our pilots were the fittest riders and they just stood out from the rest in terms of how committed they sounded.

“Everything feels like it is falling into place. We’ve spent a long time planning the project, putting the structure in place and testing for the best riders. Now it’s time to go and break some records!”

Hayles has already tasted success in the United States – at the UCI Track World Championships in Los Angeles in 2005, he helped Great Britain win the team pursuit then partnered Mark Cavendish to take the rainbow jersey in the Madison.

A year earlier, he won Olympic silver in the team pursuit at Athens.