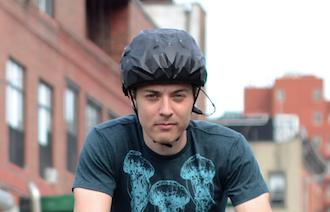 Originally developed at MIT, the MindRider helmet tracks your brainwaves to measure your emotions while you cycle. The helmet’s designers, Arlene Ducao and Ilias Koen, say the resultant data could be of use to cycle campaigners and city planners.

The MindRider is embedded with sensors that read brain activity via electroencephalography (EEG). An early prototype featured red and green lights to warn drivers if a cyclist was particularly stressed, but these have now been abandoned in favour of a light which is only visible to the cyclist. Situated above the eye, in your peripheral vision, it is green when you are relaxed and red when you’re stressed, but also indicates other moods in between.

Ducao told FastCoExist.com that the information could be used in different ways.

Josue Diaz III, a member of the development team, has been using the MindRider during his commute. He told the New York Times that he looks at the light during rides to remind himself to relax. “My mornings felt a little hotter, more red, more alert. I was in a rush and trying to watch traffic. At the end of the day, it seemed cooler, more green.”

Rides and associated emotional data can be plotted on a map so that it is possible to see the exact spots where the rider was most stressed out by traffic. Diaz, for one, seemed to relish the prospect of poring over this afterwards – even on a bad day. “Once a woman opened up her cab door and I collided with the door. I remember thinking: I can’t wait to see this.”

As with the more immediate helmet feedback, the data is colour coded. Stress levels are rated from 0-100 and then associated with a colour scale which runs from green to yellow to red.

Users are also able to anonymously share the results of their rides online and it is this side of the technology that gave rise to a successful Kickstarter project earlier in the year. The designers had been MindRiding their own streets in New York for around a year and were keen to create a citywide dataset.

By aggregating a number of users’ MindRiding maps and then combining them other kinds of datasets like traffic accident, bike lane, and demographic data, it is hoped that a useful reference can be created for other cyclists and city planners, highlighting danger spots as well as areas which are more cyclist-friendly. The developers hope that ultimately large numbers of users will upload their data to create a real-time map which can be accessed online.