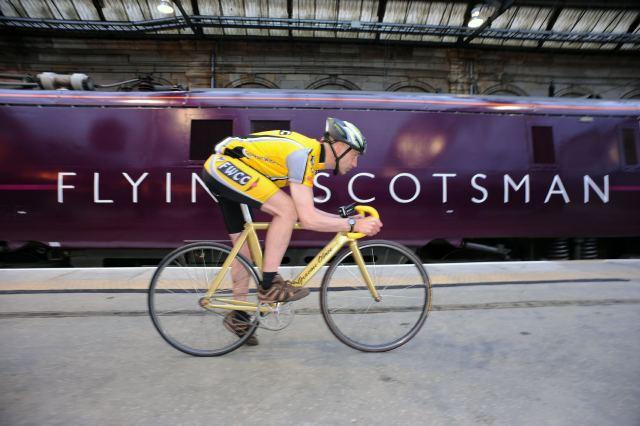 Graeme Obree, who twice held the Hour record in the 1990s, says Jack Bobridge should get back on his bike this week and have another crack at it, despite failing to break it yesterday.

Speaking to Shane Stokes of Cycling Tips, Obree, who first took the record in 1993 just 24 hours after an unsuccessful attempt at it, said Bobridge should give it another try to avoid having regrets in later life.

“I watched Bobridge’s attempt and I felt sorry for him,” said Obree. “There is no tactics or hiding place, it is awful. I think he should consider trying again, because where he is now is an awful place to be in.

“He has to fast forward 10 or 20 years from now and think of it as him looking back to now. He will be saying, ‘my goodness, I should have put another effort in.’

“He has got the physical ability, so if he doesn’t try again he will regret it in 20 years’ time.”

Obree believes that when Sir Bradley Wiggins undertakes his own attempt on the record later this year, he will set a benchmark others will find hard to beat, meaning time is of the essence for Bobridge.

“When Bradley [Wiggins] steps up it will be out of his reach and he will never have got it,” he explained. “He will be like, ‘I should have stepped up like others did.’ Otherwise it will be, ‘I never got it’ and that’s not the place to be.”

Bobridge went out too quickly yesterday and although he was still just on course to take the record at the halfway point, he began to fall behind schedule and was unable to claw back the lost distance late on.

But Obree says that the ride by Francesco Moser to set the record that he himself beat in 1993 demonstrated why Bobridge should have another go.

“Moser stepped up in Mexico City, he went back after three or four days and went quicker,” Obree pointed out.

“So the precedent is that if he waits three or four days and goes again – actually, maybe four or five days would be better – then it’s possible. He just needs turns his legs over in that time, recovering, then try again.

“He just has to do 52 kilometres and get his name up there. He has to redeem that if he can.”

Whether Bobridge himself will be up for another attempt is another question entirely. The Australian said after yesterday’s ride that it was “by far the hardest thing I’ve ever done, I think, and the hardest thing I will ever do.”

But Obree said: “It certainly it is not a great situation as things are right now. I saw him lying there. With the silence of the crowd, it was like somebody died.