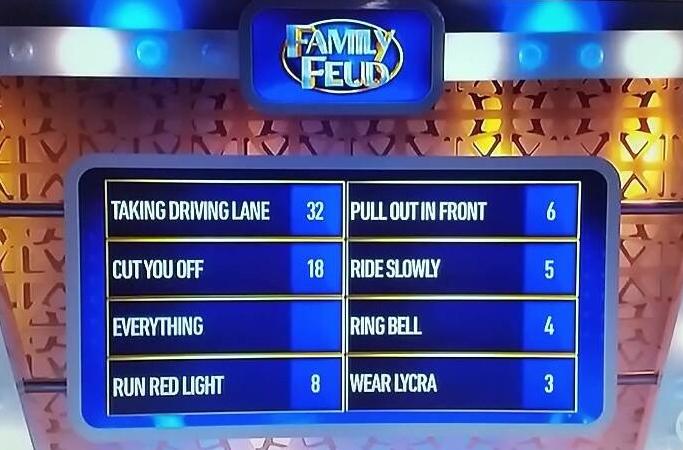 "What is something annoying that a cyclist might do?" asks game show

Family Feud is what we in the UK know as Family Fortunes. Contestants have to try and guess the most common response to each question, as voted on by an audience of 100. Answers to this particular question included ‘run red light’, ‘wear lycra’ and perhaps most staggeringly of all ‘everything’. The top two responses were "taking driving lane” (32 votes) and "cut you off” (18).

The Sydney Morning Herald reports that the social media response was swift and strong. Many felt that the broadcaster, Channel Ten, was encouraging hatred of vulnerable road users. “10/10 for promoting intolerance and ignoring advocacy work,” said Twitter user @maevans1969.

"Seriously, the hatred against cyclists has to stop. We are all someone's mother, father, brother, sister, son, daughter," he says. "We all have family and everyone knows a cyclist."

Network Ten has offered a qualified apology, without stating how the question came to be asked in the first place.

"Network Ten apologises if the response to a question in Family Feud last night caused any offence. The results are determined by a survey of 100 Australians and we understand they are not necessarily reflective of all Australians."

In October, Family Feud asked its contestants to "name something people think is a woman's job" with correct answers including cooking, washing clothes, cleaning, nursing, doing the dishes, hairdressing and domestic duties.

This followed on from a similar question about what might be considered a man’s job and Twitter user @BicycleAdagio suggested an additional question to sit alongside the one about cyclists. “Things motorists do that annoy you: Kill and maim vulnerable road users with little punishment. 100%”