Beat the rail fare increases by riding to work

Meet the riders who save up to £2,400 per year the the ultimate fare-dodge
by John Stevenson

As usual at the beginning of the year, train fare increases of up to 2.5 percent have been announced, with an average rise of 2.2 percent and the larger rises affecting many commuters into London.

What's the best way to beat the fare rises? British Cycling suggests riding to work, and says the experience of some of its members shows how the bike can help save up to £2,400 per year.

According to the Campaign for Better Transport (CBT), many commuters will pay 20-25% more for their season tickets in January 2015 than in 2010.

But British Cycling member Chris avoids £2,400 in faces by riding from Enfield to central London every day, a total of 125 miles a week.

After six months of riding instead of taking the train into work, Chris has reduced his blood pressure and cholesterol level and lost almost two stone in weight.

He said: “I’ve never had a car, but never been a ‘serious’ cyclist ether, so I was determined this year to keep it up this year and I’m pleased to say I have. I’m now planning my first cycling touring holiday for next year too as the money I’m saving I can spend on cycling too.

“The savings are great, but commuting by bike for health, fitness and the love of cycling is what really keeps me going.”

Not everyone stands to save as much money as Chris, but even a modest commuting ride can have significant financial benefits. 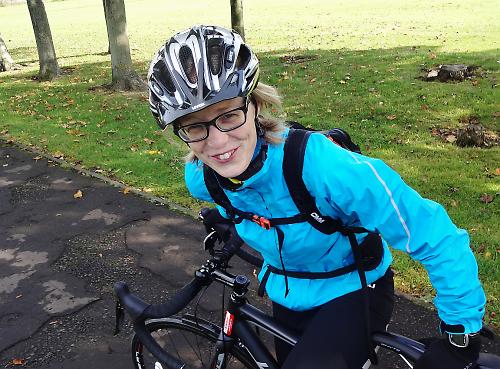 Julia saves £648 per year by riding instead of using public transport in Edinburgh. She started cycling to work when she lived in Germany and kept it up when she moved to Edinburgh in 2012. She specifically chose a flat from where commuting by bike would be possible. Her trip is four miles each way and is much faster and easier than getting a bus or train - and also a lot cheaper as a monthly ticket costs £54.

Julia said: “In Germany my commute by bike helped me to lose weight, so I was generally much healthier than before. It also felt great to cycle past the cars standing in slow-moving traffic.

"If people are lucky enough to have a secluded cycle path available near to them, they can catch beautiful, quiet sunrises. Also, you’ll find that you’re considered really bad-ass if you cycle in strong rain and wind although this is actually fairly normal.” Hannah commutes from Ashton under Lyne to the outskirts of Manchester, a journey that would otherwise cost £1,500 per year. Her bike costs around £200 per year to maintain and she pockets the excess £1,300 to spend on holidays.

Hannah said: “As well as saving a lot of money and keeping fit, cycling gives you headspace and keeps you away from germs on public transport. Since I’ve taken up cycling I rarely get a cold.

“I now enjoy cycling so much that I wouldn’t take a job where I couldn’t commute by bike.”

British Cycling’s campaigns manager, Martin Key, said: “Not only is cycling to work much cheaper, it also often works out much quicker than taking the train – especially if it follows an indirect route. People who travel less than 10 miles to work should seriously consider cycling – not only will they be much fitter and healthier, they’ll also save hundreds of pounds in rail fares and even gym membership.

“Cycling is also great for making people feel good. Research has shown that cycling to work makes people less stressed and more productive. The trend for cycling to work is definitely on the increase – our membership has doubled to 100,000 in the last two years with 48% choosing to cycle to work.”