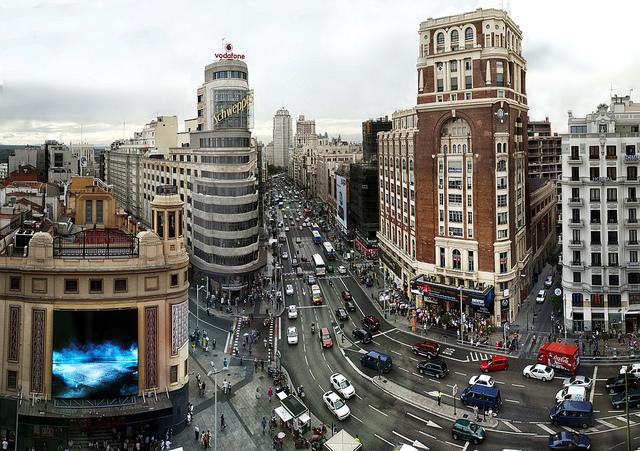 Madrid pavement cyclists face fines of up to €1,200

Update: We know that 28 December - the Feast of The Holy Innocents - sees the equivalent of April Fools Day in Spain and other Spanish-speaking countries countries, but we still fell for this one and we'll hold our hands up. According to Enbicipormadrid.es, most of its article that ours was based on is made up; exceptions are that it is illegal to ride on the pavement in Madrid, and there are laws against harassment of cyclists and for motorists to observe safe distances between their vehicles and bike riders. Here is the original article.

Pavement cyclists in Madrid face fines of up to €1,200 and risk having their bikes seized under a new law, with city authorities promising a “zero tolerance” approach when it comes into effect next week. The move has been criticised by cycling campaigners and opposition politicians.

In September, the city’s mayor, Ana Botella, announced plans to crack down on pavement cyclists and those riding bikes in pedestrian areas where they are banned.

Botella was acting in response to complaints from residents and businesses over antisocial cycling in some of the Spanish capital’s most high profile locations including Calle Serrano and the Salamanca district's ‘Golden Mile.’

Criticised for the city’s failure to address the problem before, Botella vowed to “end the impunity of those who believe the streets belong to them.”

According to a post on the blog Enbicipormadrid.es, the law will take effect on 7 January through regulations passed by Núñez Guijarro, who heads the city’s department of safety and security.

Cyclists breaking the law will be fined between €500 and €1,200, depending on the perceived recklessness of the offence. There is no reduction of the fine for early payment, and those who do not pay will have their bikes impounded, with the municipal police told to take a zero tolerance approach.

However, Socialist party spokesman Jaime Lissavetzky says the fines are disproportionate and points out that in most cases those who have their bikes impounded will not retrieve them, since they will be worth less than the fine they have to pay. With municipal elections looming, he also accused the mayor of caring only about affluent parts of the city.

The campaigners behind Enbicipormadrid.es say their proposals to launch an awareness campaign “have fallen on deaf ears with the city choosing to take a heavy handed approach,” and urged cyclists “to be careful if you don’t want to contribute ‘selflessly’ to the recovery of the municipal coffers.”

In November, Spain’s second city, Barcelona, unveiled a different approach to getting cyclists off the pavement – instead of fining them, it was instead targeting motorists in a bid to make the streets safer for those on two wheels.

Madrid's government insists that it is not singling out cyclists, and says it is also targeting motorists who do not respect bike riders.

Fines for drivers include €500 for not staying more than 5 metres behind a cyclist in front, €1,500 for not leaving a gap of 1.5 metres when overtaking and €1,800 for harassing the rider or excessive use of the horn.