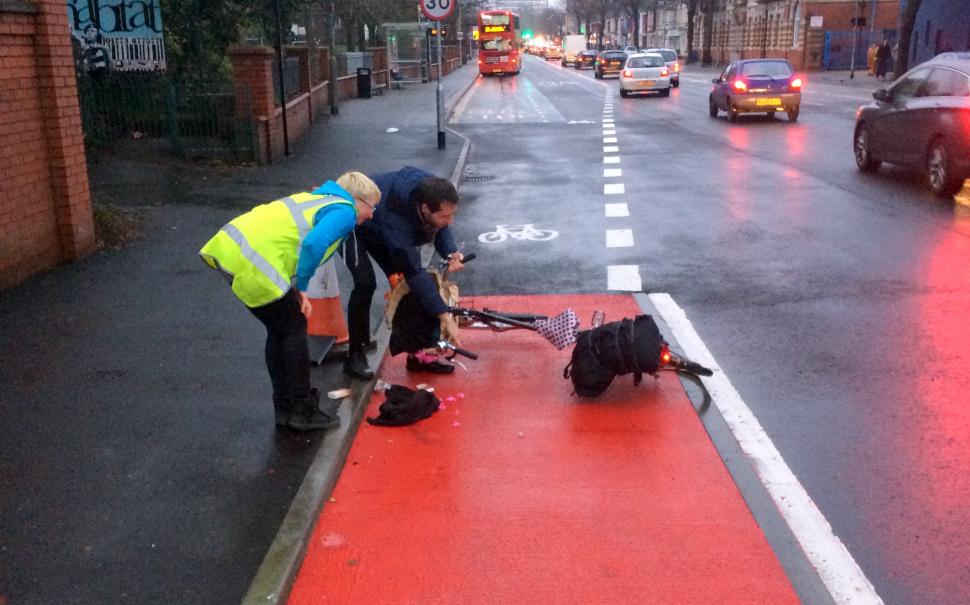 A ‘death trap’ cycle lane in Brighton has claimed its fourth and fifth victims just hours after we reported three separate incidents in which cyclists were injured in falls.

The Lewes Road cycle lane features a disguised kerb which flipped three cyclists over in a five minute period one morning this week - and now a fourth has come forward saying she was left with a broken hand after hitting the same spot.

Bev Wells, 55, was riding on the new Vogue Gyratory cycle development, built at a cost of £600,000 and only opened this week.

Ms Wells told the Argus: “I’m in a hell of a lot of pain. I went to hospital for x-rays and I have a broken hand, a grazed face and a bruised body. I did exactly what the other three cyclists did – smashed into the hidden bit of kerb and came off.

“Luckily I landed on the pavement side. If I had landed in the road I dread to think what might have happened.”

The seamstress will now be unable to work for six weeks and will not be able to drive to visit her family this Christmas.

She said: “It’s a ridiculous design and it’s only a matter of time before someone is seriously hurt.

“I’ve complained to the council and they told me to await a call from their insurers. “I have lost my livelihood for a number of weeks due to a poorly designed, over-priced death trap that hasn't even been open a week.”

A fifth cyclist, Dave MacAdam said he also came off at the same spot on Monday.

He said: “The design makes me very angry. It must be changed. My knee is a mess and so is my hand. I am still limping three days later. I am an experienced mountain biker and have never fallen off except when I’ve been an idiot. This is a really poorly designed cycle lane.”

Brighton and Hove City Council said it could not comment until it had seen “police reports” but put cones around the offending area.

A spokeswoman said: “We are aware of the cycle lane incidents and are investigating them to make sure the temporary safety measures that are in place there are appropriate.”

Yesterday we reported how three riders fell in the same spot, the first being Rick McEwen who fell at around 8am.

He said: “There’s a little kerb which you can’t see and I went right into it. I flipped over my handlebars and on to my side.

“I was getting myself together after the crash when I saw Simon come round the corner and do exactly the same thing.

“He had a really nasty injury to his elbow and was quite shocked. A few minutes later a woman came round the corner and also came off.

“There should be something identifying the kerb. It doesn’t need to be there. It’s a death trap. I wonder how many others have crashed?”

The next rider to fall, Simon Cooper was taken to hospital with a deep cut in his elbow that needed stitches.

He said: “The cycle lane is raised above the road and the kerb is impossible to see.

“I was left shocked and needed stitches to a deep wound in my elbow.

“I went to hospital and had to take the day off.”

Cooper tweeted an image of the next casualty and appealed on Twitter for Brighton Green MP Caroline Lucas to pressure the council to fix the lane.