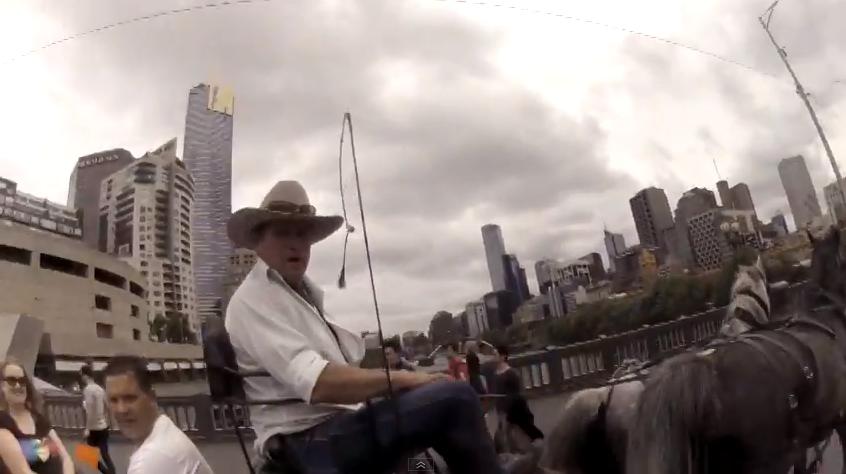 VIDEO: 'My name's P*** Off, D***ckhead' - what happened when a Melbourne cyclist accused a carriage operator of using his horses as a weapon

Aggressive carriage operator did not have a permit to drive in the city, confirms local council
by Sarah Barth

A cyclist in Melbourne has accused a horse drawn carriage operator of using his carriage as ‘a weapon’ in an aggressive altercation over the use of bike lanes.

Last weekend, the YouTube user Dukeo Kent filmed the operator’s response after he asked him to keep out of the bike lane.

The cyclist said: “He belligerently mouths off, claiming he can do whatever he likes. He runs several red lights, including failing to give way to a group of pedestrians on a crossing.

“I ask him for his name and apparently he is called "P*** Off D***head". I tell him he gives his industry a bad name and he responds by using his carriage as a weapon, trying to run over me on my bicycle.

A campaign group, Melbourne Against Horse-Drawn Carriages, claimed to have identified the carriage operator, and said that he did not have a permit to operate within the City of Melbourne as a street trader.

ABC News attempted to contact the man, who confirmed he was a driver but would not say whether it was him in the video, adding: "What do you think I am, a f---ing police informer. F--- off”.

The cyclist said: “I don't like the horse drawn carriages, but if they do their job professionally and look after their animals then maybe we can coexist.

“My main objection to them is that they believe they are above the law, blatantly flaunting their disregard for the road rules from their misguided belief that everyone has to give way to a horse.

“But as a cyclist, what really annoys me is how certain operators ride in the bicycle lane, blocking it for even the slowest of riders, spilling manure from overfull horse poop bags onto the bike lane. “

A spokeswoman for Melbourne Council, which issues permits for horse-drawn carriages, said: "The incident captured in the YouTube clip has been reported to Victoria Police which is the responsible authority for monitoring and enforcing the Road Safety Road Rules.