Tinkoff-Saxo swap SRAM for Shimano, Zipp for Roval and FSA

Following the unveiling of their eyebrow raising camo kit yesterday, Tinkoff-Saxo's first training camp in preparation for the 2015 season gave us a first glimpse at what they'll be riding next season. They'll continue with Specialized, riding for the most part the brand new Tarmac, but they've swapped from SRAM to Shimano and Zipp wheels and finishing kit to Roval and FSA respectively. It was rumoured this year that Tinkoff-Saxo might swap suppliers. They had already started using Roval wheels alongside their existing Zipp wheels as far back as the Tour de France, and when we had a good look at Oleg Tinkoff's own bike (he likes to ride with the team on rest days and training camps as much as he can) it was fully kitted out with Shimano, and given how much influence he has on the team, there were some expecting the team to move over to the Japanese supplier. These photos confirm that has happened for 2015. 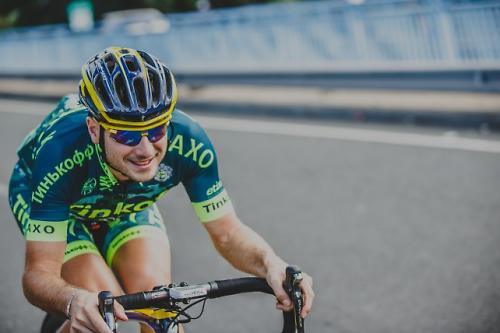 We've not yet had a proper close look at the bikes, but based on these photos they're clearly riding Shimano Dura-Ace Di2 groupsets, the most popular groupset in the professional peloton at the moment. It does strangely look like they're using SRAM Red brake calipers though, but we'll confirm that when we do get a closer look at the bikes.

Getting the @iamspecialized bikes ready for the Gran Canaria training camp. The 2015 season starts today. pic.twitter.com/bbrQlyKggM

The other bike change is the change from Zipp to Roval wheels, the wheel brand owned by Specialized - the bicycle manufacturer will no doubt be behind this push to promote the wheel brand to the pro peloton and raise their profile. Zipp used to supply handlebars, stems and seatposts also, but FSA have been brought in for 2015, along with chainsets. It does look like Prologo will continue as saddle supplier.

This news means that Shimano are even more dominant in the professional peloton. There are 18 WorldTour teams and this season Shimano supplied 10 of them, with SRAM just three, while Campagnolo have five teams. Unless there are any other groupset changes for other teams, SRAM are heading into the 2015 season with just two top-tier teams riding their kit.

1
Cyclist's severed foot found on hit-and-run suspect's car as driver arrested
2
"They said give us the bike or we stab you": Another cyclist targeted by motorbike-riding muggers on popular route out of London
3
"Someone could be killed": Path users blame speeding cyclists for New Forest danger
4
Prominent transport author claims appointment of Chris Boardman as Active Travel Commissioner is part of "Great Reset agenda"
5
road.cc Recommends updated with 11 brilliant new products
6
Lone female cyclists are “being targeted”, says former Scottish champion
7
Cyclist killed after being struck by van driver during time trial
8
New Shimano 105 R7100 groupset goes 12-speed, Di2 and disc brake only