Tinkoff-Saxo have unveiled a striking kit that their riders are wearing at a training camp on Gran Canaria ahead of the launch in Moscow later this month of the jerseys riders such as Peter Sagan and Alberto Contador will be wearing during the 2015 season.

The team posted a number of pictures of the training kit made by Sportful to its Twitter account, shown in the gallery above.

While there is no news yet of whether the racing kit will have a similar design, with MTN-Qhubeka unveiling a kit last week that takes inspiration from those sported by football teams including Notts County – the world’s oldest professional club – the peloton could see an interesting mix of fashions next year. 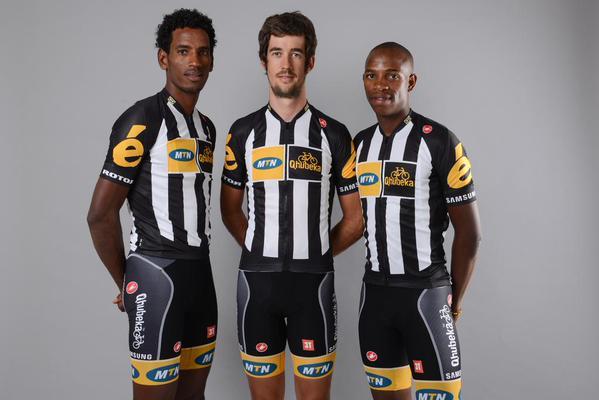 Given that Saxo-Tinkoff is owned by Russian entrepreneur Oleg Tinkov, the camouflage design may well raise eyebrows at a time when memories of the Cold War are being revived.

Russia’s military aircraft have reportedly encroached on Western Europe airspace in recent weeks, and several of its warships are currently engaged in manoeuvres in the English Channel.

Could the design be interpreted, then, as a bit of sabre-rattling to disrupt the opposition ahead of the 2015 season starting at next month’s Tour Down Under?

Camo-print jerseys don’t tend to get the best reception, whatever the sport.

South African rugby union side the Blue Bulls made a list of the worst five team kits ever with its 2014 away outfit, while the goalkeeper’s jersey sported by Everton’s Tim Howard in 2011/12 was described by The Guardian as “hideous.”

Meanwhile, the Army Rowing Club’s camouflage blazer never ceases to stand out among the stripes at the Henley Royal Regatta.

Perhaps the most notorious ‘camouflage’ kit in sport wasn’t based on what the military terms “disruptive pattern material,” however – Manchester United’s grey away kit from 1995/96 achieved notoriety when Sir Alex Ferguson ordered his players to change out of it at half time when they were losing 3-0 to Southampton.

It was claimed that the kit, specifically designed to boost sales among fans by looking good with jeans – the jury is still out on that, by the way – made it impossible for the team’s players to see each other.