Back to news
news
Fitness
Features

There are many challenges to test yourself but the latest trend is ‘Everesting’, which is quite simply the challenge of riding the elevation gain of Mount Everest, 8848m, on the same hill non-stop. And the latest to join the rapidly growing Everesting hall of fame is James Wyatt, who cycled up Toys Hill in Kent 59 times on 24th November to earn his place in history. 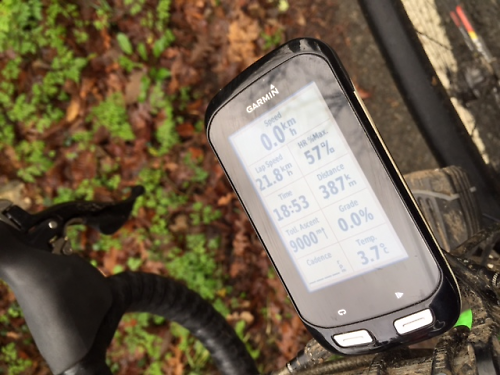 Toys Hill is a well known climb to any London or South East-based cyclist. It lies south of the North Downs on a steep scarp slope of the Greensand Ridge. The summit is 235m above sea level, and the road approached from the North is 1.4 km long with 125m height gain at an average 9% gradient. 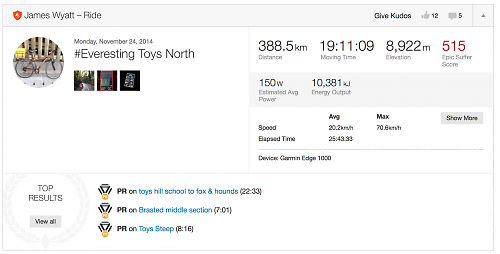 Everesting is beautifully simple. You pick your hill, and ride up and down it (no loops allowed) as many times as it takes to reach the equivalent elevation gain of Everest - 8,848m - in a single ride, which means you can't stop for a nap. It's become hugely popular in the last couple of years partly due to Strava's increasing popularity (most Everesting feats are recorded and shared on Strava) with more hills being claimed all the time. 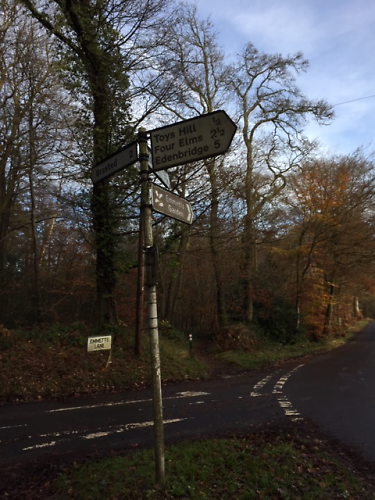 James had to ride up Toys Hill 59 times and actually rode 9,027m in 25hrs 43mins 33secs. His total recorded distance was 388.5km. That’s a long day in the saddle, and ensures James joins the Everesting hall of fame. James rode a Storck Scenerio made lighter with some Tune components (well you would if you could wouldn't you?), and a 53/39 chainset and 11-25 cassette. That's a proper gear setup, possibly not our first choice for climbing the equivalent of Everest in one shot. His backup bike was a Cannondale CAADX with some lower gears.

We caught up with James to find out just what he went through, here is his account in his own words:

I'd wanted to attempt since hearing about it on Twitter in the summer, but never quite got round to it, I knew November was late in the season, but the legs were feeling good after a solid year on the bike (11,000km so far in 2014). I'd also just heard that I'd secured a new job after a few months off, so time for messing about on the bike was running out. I checked the forecast and it suggested a chilly but dry day and night, so I went for it.

I had no idea it was going to take me almost 26 hours, but I did spend a fair bit of time in the pub at the top! The landlord was a bloody legend and helped with copious awesome coffees, Garmin charging, warming up and replacement of calories, I burnt almost 12,000...

Apart from going up and down the same damp, potholed stretch of tarmac 59 times, mostly in sub zero temperatures, not a great deal happened!?!

I set off at about 10:00, and on my first repeat I  got cross at some other cyclists. I'd seen them changing a tube on my way down, and on my way back up I saw the old tube draped over a sign, so with fresh legs I sprinted after them and gave them an earful, they promised to pick it up later, but I doubted they would, so said I'd collect it when I finished my reps.

I saw plenty of other cyclists, some of which were doing multiple reps too. But we were always heading in other directions, so I couldn't discuss my personal challenge with any of them. It was basically a case of manning up and grinding out the reps. I stopped every four hours or so for food and a hot drink.

Eventually the sun (and the temperature) went down and I still had well over 4,000m to climb.

The night went pretty quickly, I saw foxes and an awesome barn owl, but not much else happened, just up and down, up and down.

I had one puncture, but my hands were so cold I decided to walk to the top of the hill and get my other bike rather then try and change a tube. More up and down, now on an aluminium bike with 34 32 gearing so I could spin up it nicely.

It was pretty miserable just after dawn and I bonked a tiny bit at about 08:00, and spent a couple of hours thinking it would never end.

But at about 11:00 (25 hours after I started) I hit 8,848m, I carried on to the top and did one more rep, just in case. I briefly thought about trying to hit 10,000m, but then reminded myself it would have been another three hours, so called it a day. Got in the van and headed back to London. Annoyingly, I was so knackered, I forgot to pick up the inner tube.

But I completed the strava climbing challenge, and will get a (titanium) badge and mum's getting me the Everesting jersey for Christmas, blood, sweat and tears!

A massive congratulations to James on his succesful Everesting attempt. James rode this challenge completely unsupported, but he would like to thank the Fox and Hounds pub at the top of the hill for keeping him stocked up with food and ale at the finish to replace all those calories he burnt through. James Wyatt’s Strava activity profile can be viewed here and it's on Veloviewer too.

We asked James if he has any advice for anyone contemplating their own Everesting attempt, this is what he said.

As for advice – unless you fancy a 250 miles slog, maybe choose a steeper hill and I’d probably recommend doing it in the summer too!

We spotted this ride because James is a member of the road.cc Strava club, and so could you be, head right this way to join now.