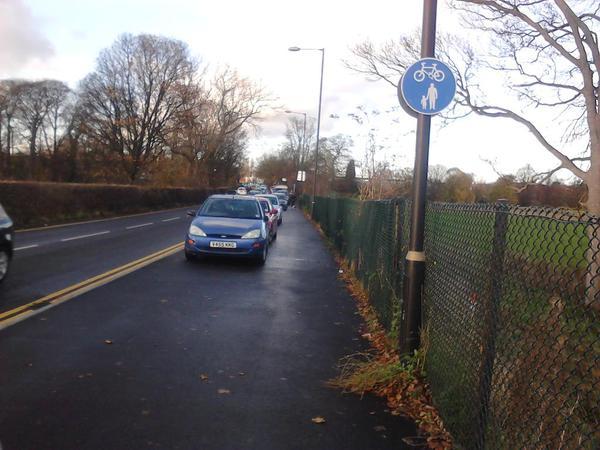 Campaigners slam councils for delays and misuse of cycling funding

With new funding announced today, is the last round being spent well?
by John Stevenson

Delays, council reluctance to provide for cycling, and lack of planning transparency have blighted the implementation of cycling improvements funded the Cycle City Ambition scheme according to campaign groups in three of the eight cities awarded money by the scheme.

An extra £124 million pounds is to be allocated to the English cities that have already been awarded the Department for Transport's Cycle City Ambition grants.

But the track record of some councils when it comes to spending the cash already allocated to cycling has not been impressive, according to campaigners in Leeds, Manchester and Newcastle. Those three cities account for 56 percent of the cash allocated in the initial Cycle City Ambition funding.

Road.cc asked campaign groups in all eight cities how their councils had performed so far. We received replies from the three Northern groups and Cambridge.

Katja Leyendecker of Newcastle campaign group Newcycling said there had been “much talk, hype and consultation, but nothing linear has been built, [aside from] one small junction improvement and we aren't even happy with the quality as it incorporates shared space - unfairly pitting walking and cycling against each other.”

Greater Manchester Cycling Campaign (GMCC) is also unhappy at the use of Cycle City Ambition funding for shared-space schemes.

Jonathan Fingland of GMCC told road.cc that Manchester had put shovels in the ground, but the results so far were unimpressive.

He said: “One example being Manchester Road in Cheadle where it's now less comfortable to cycle on the road due to lane narrowing, and it's not yet possible to cycle effectively on the shared-use footway as it is obstructed by large, free-standing speed limit and roadworks signs.”

Other Manchester schemes have also involved the construction of shared-use paths, which inevitably lead to conflict between riders and pedestrians if they become busy. Fingland said: “Shared-use footways and toucan crossings do not a cycle route make”.

It's particularly disappointing, says Fingland, in light of the guidelines supposed to shape these projects.

Greater Manchester's bid document said facilities would be built “in accordance with the core Vélocity 2025 objective of providing largely segregated cycle facilities to cater for the full range of cyclists" and "cycle tracks or cycle lanes with a safety buffer should be considered first and provided where it is viable to do so". [My emphasis.]

“The level of ambition is low,” Fingland adds.

Leeds Cycling Campaign's Lizzie Reather told road.cc the planned canal towpath refurbishment, part of a Leeds-Bradford 'cycle superhighway' was either underway or about to start, and construction of the superhighway itself was due to start in January.

The towpath refurbishment was originally due to have been finished in time for the Tour de France.

Reather believes that Leeds could do a huge amount by carefully spending the grants, but that's just not happening.

She said: “Instead we spend multiple millions on a bike track alongside a major road, that's in danger of being seriously compromised because we can't make the junctions work well for bikes without reducing vehicle capacity, and can't reduce car parking even when there's plenty within a 60 second walk.”

Things are rather better in Cambridge, where out-of-town schemes are complete or mostly complete, according to CamCycle's Hester Wells, and projects within Cambridge are ready to go.

She said there had been some delays, but they're not critical.

Wells said: “The council deferred approval of the Hills Road and Huntingdon Road schemes due to concerns over floating bus stops which set things back, but it was resolved and approved at a subsequent meeting. The money should all be spent by the timescales required.”

As detailed above, Manchester has ignored its pledge to build largely segregated cycle facilities, while Newcastle has rebuffed attempts by NewCycling to explain flaws in its projects, when they could actually find out about them.

Leyendecker said: "Council plays everything close to their chests; budgets, programme and timetables are totally unclear and not transparent to the public."

When the campaigners realised that the schedule was slipping and Newcastle was in danger of failing to spend the grant in time, and therefore risked having to return the money, NewCycling attempted to raise the issue.

"We spent days analysing data to make sure we had this right, and then we alerted the programme board, but they weren't interested in hearing us. There's a bit of head-in-sand attitude here. Openness and transparency in decision-making and communication is still lacking."

Reather says that the single thing that would improve Leeds most for cycling is to have one lane of the city centre loop road reallocated to a two-way bike track.

"Decision makers just laugh at that idea," she said. "Changes are desperately needed to attitudes and working practices."

All four campaign groups emphasised that the new funding must be directed into high quality cycling facilities, and that their cities could be transformed by intelligent use of the money.

Reather can see many ways Leeds could spend the cash, as well as Leeds Cycling Campaign's dream of a cycleway round the city loop.

She said: "We could make that money go a long way, by making streets more cycle-friendly as part of road renewals, limiting car parking where it gets in the way of cycling, blocking off rat-runs with filtered permeability, high quality crossings of major roads (better value than expensive remodelling of major junctions), reallocating space on multi-laned roads to protected bike provision (instead of chewing up pavements and verges), opening up public parks to family cycling, and making 20mph default."

Fingland said GMCC wanted to see: "Re-allocation of road space on main routes, to create safe space for cycling that will enable more people to cycle for their everyday journeys."

CamCycle's Wells sees a chance to use the ne funding to solve one of the biggest problems in cycleway designs: crossing junctions.

"I'd like to see priority across side-roads to a standard design. I want someone, anyone, to get UK examples of junctions we can all point to and say: "the world didn't fall in, it's safe, convenient, it's UK highways-compliant: now let's do it everywhere".

"With relatively little money set aside for cycling compared with the full transport budget, the priority ought to be on creating examples the rest of the country can follow."

She added: "But then Cycle City Ambition suggests that as well, and it hasn't quite worked out like that."