Conquer the roads with RiderState, a smartphone game app for cyclists

RiderState is a smartphone app for cyclists that tracks your location, the idea being that you conquer as many streets and roads as possible in your local cycling area. The world is divided up into tiles and the aim is to dominate as much of the map as you can.

It’s more than a simple game though, because behind RiderState is a desire to promote cycling as an alternative form of transport.

“Mobility and pollution are a serious issue in many cities around the world. The Riderstate app is an initiative that aims to help solve or mitigate these problems by using gamification techniques as a way to promote the use of bikes in our society.”

RiderState keeps track of your conquering with global leaderboards and award badges. Cyclists can compete individually of form allegiance by joining groups of fellow cyclists in an area.

Sound like a gimmick? road.cc reader bikeboy76 has been using it regularly since its release earlier this year, and says this of it:

It might seem like a gimmick riding against strangers and not even for speed, but by year's end I should have covered 7000km, up a thousand on last year. Until I started using the app in the spring my riding was really flagging and I would have been unprepared for the sportive events I set for myself. I also started using Strava after upgrading my phone. In combination they are a great spur. 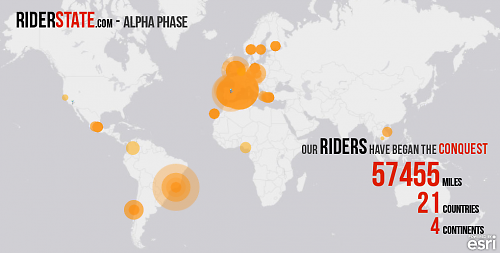 As well as turning your cycling into a game, the app is an interesting way of revealing how far and wide you cycle and could inspirie you to explore new areas.

RiderState divides the world into 10,000m2 zones, each representing a territory waiting to be conquered. You can create closed groups with friends to compete against other players.

The app also provides your real-time location on a map when you’re cycling, and this video (above) offers a good demonstration.

More at www.riderstate.com and you can download the iPhone app here and the Android app here, and they’re both free to download.