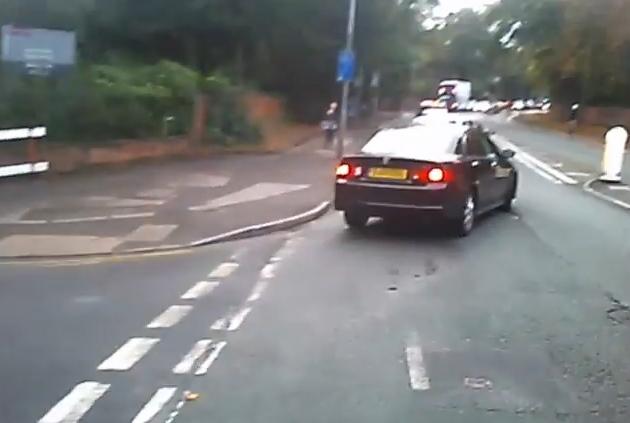 Still from video uploaded to YouTube by MCR Cyclist

“I know wearing a camera is controversial but without it, it would have been my word against the driver’s”
by Alex Bowden

A Manchester cyclist is to use helmet cam footage of the moment when he was hit by a taxi as evidence in a civil action against the driver. The driver, who pulled out of a side street, was sent on a driver improvement course. The cyclist has described the police response as ‘lacklustre’.

The incident took place on Wilmslow Road in Fallowfield at the junction with Old Hall Lane – a stretch of road included in Manchester’s plans for 37 miles of new cycleways. YouTube user MCR Cyclist, who uploaded the video, writes of the incident: “Those who are regulars to my channel will have noticed a number of videos where drivers have failed to ‘give way’. Sadly, my luck ran out.”

Speaking to the Manchester Evening News, the cyclist, who wished to be identified only as Dan, said:

“I was cycling down Wilmslow Road and the driver failed to give way and pulled out. He basically T-boned me, hit me on the middle of the bike then I went onto the bonnet, spun round and onto the ground. Amazingly I had no broken bones but was left with scrapes and whiplash injuries I’m still having physio for.

“Luckily it’s nothing life-threatening and I’ve been told they should mend within the next year. I know wearing a camera is controversial but without it it would have been my word against the driver’s. I was in shock at the scene so I’d like to thank the two people who stopped to help.”

Writing underneath the video on YouTube, Dan writes that because he didn't request an ambulance, police would not come to the scene. “Even after they were told it was a collision involving a cyclist [and] that I was blocking a road.”

Dan has described his dealings with the police as ‘lacklustre’.

“After making contact with the police I've been informed that this is an ‘injury’ incident and its [sic] highly doubtful any further action will be taken. Further, while I have made it clear that I caught the incident on camera. They've stated they are not interested in seeing it. Therefore, one can only assume they [are] not too interested in cycling safety in Manchester.”

Dan later learnt that the driver had been sent on a driver improvement course with a spokesman for Greater Manchester Police saying something similar:  “I can confirm an RTC between a vehicle, a silver Skoda Octavia estate, which collided with a cyclist. The driver would have been given a fixed penalty notice or speed awareness course.”

Dan is now pursuing civil action against the taxi driver who worked for Station Cars.