A huge turnout to celebrate the life of John Radford

Over 400 turn out to remember and celebrate John Radford (+video)

Christ Church in the hamlet of Helme, nestling in the Pennines, overflowed with the size of the congregation yesterday as family, friends and fellow cyclists celebrated the life of the popular cyclist, administrator and event organiser, John Radford, who lived nearby, writes Martyn Bolt.

Over 400 people, some travelling over 200 miles to be there, transformed the village church into a swathe of colour. The family had requested people to wear their cycling tops if they wished, and a great number cycled to the service 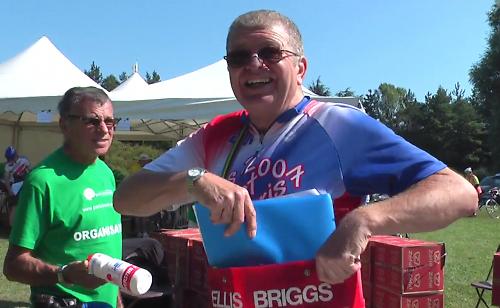 John Radford at Paris-Brest-Paris in 2011

Moving tributes, and humorous anecdotes were given by his widow Pat; Ken Roberts , secretary in the local CTC section when John was chairman and a fellow PBP rider. Also attending the service were local cycling legend Brian Robinson, Britain’s first Tour de France stage winner who at 84 had ridden out to be there; and Mark Burns-Williamson, West Yorkshire’s Police & Crime Commissioner who had met and worked with John on the CTC Road Justice campaign. West Yorkshire Police were also represented by Assistant Chief Constable Mark Milsom, himself a cyclist. Pat also thanked West Yorkshire Police for their great support and diligence in the case.

Damon Peacock made this commemorative video for the occasion.

Although a keen rider in his youth in Derby, John let his interest in cycling slide and it was only when his daughters Emma & Helen were growing up that he took it up again. He immersed himself in both encouraging others to enjoy the sport by short, slow easy rides, and in taking part in many long distance rides himself, such as Paris-Brest-Paris and London-Edinburgh-London. It was John who worked with CTC President Phil Liggett to create and organise for several years the Phil & Friends ride which took in the Pennines and Peak District.

John was knocked off his bike on July 31 2013 and died on November 4 this year without recovering from his injuries.

While the event was naturally a sad time due to the circumstances of John’s death, everyone present had come into contact with John in some way and so had their memories to share at a reception afterwards in the Meltham sports club. The first drink was on John.

Michael Gledhill, the driver who hit John, was found guilty of causing serious injuries by dangerous driving. The possibility of reviewing the case against Gledhill was raised recently by John’s local MP Jason McCartney, a member of Holmfirth Cycling Club, when Justice Secretary Chris Grayling visited the area.

The proceeds of the collection will be split between the church, of which John's widow Pat is a member and Streetbikes, a community cycling initiative recycling bikes and getting more people riding.