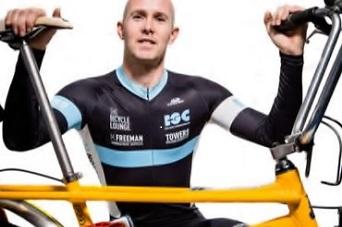 It's about the rider, not the bike, says cycling coach Dave Sims - and he plans to prove it next summer...
by Simon_MacMichael

Can someone riding a Raleigh Chopper make it round the 3,344 kilometres – that’s 2,078 miles – of the route of next year’s Tour de France, Alpe d’Huez and all? That’s what British cyclist Dave Sims, who this summer tackled L’Etape du Tour on the iconic bike, plans to do next July.

With UCI ProTeam status secured (that’s Union Chopper International), they will set out from Utrecht on Thursday 2 July, two days before the Grand Départ of the race itself.

The quartet are raising money for the charity Help for Heroes, with Sims inspired after meeting an ex-servicewoman in Mallorca earlier this year who is in the British Paralympic team and had just ridden up one of the island’s biggest climbs on a handcycle.

Lancashire-based Sims runs cycling-focused coaching business My Performance Coach and is confident of completing the 21 stages.

The bike is a slightly modified version of the one that many road.cc readers will have ridden back in the 1970s and 1980s, with a three 8-speed Sturmey Archer hub, rather than the 3-speed version that came with the original. Here’s the spec.

Sims doesn’t adhere to the Velominati school of ‘Rules,’ but has five of his own:

Rule #1 - Respect your body over the bike. Are your arteries as clean and smooth as your frame is? No.

Rule #5 - Always respect the ability of the rider over the bike. Team Chop doesn't do cycle snobbery.

A video posted to YouTube last week shows Sims taking the Chopper to a speed of 39mph.

“We are quite sure that speeds of this nature have never been recorded on such a mode of transport before,” says Team Chop.

“Proof if ever you wanted it, that it's not about the bike, but what you have to power it!”

Next summer in the Netherlands and France, he anticipates a rather more sedate average speed of 14-16mph.