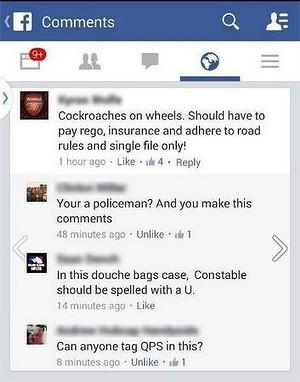 Police in Australia have been accused of calling cyclists "cockroaches" in an online row in which a cycle advocacy group alleges up to five officers posted inappropriate personal views on Facebook.

Cycle.org.au invited comments on its Facebook page about a truck driver who appeared to have breached the one-metre passing laws when overtaking a cyclist.

The group’s president Edward Hore has claimed five Queensland police officers responded, one saying: "Riding bikes on the road is not a 'right', it's stupid.”

Another, said to be a Senior Sergeant, allegedly said: “Cockroaches on wheels. Should have to pay rego, insurance and adhere to road rules and single file only."

Mr Hore has complained to the Crime and Corruption Commission about the comments.

"This is a disgusting example of police overstepping their role," he told the Brisbane Times.

"If these police had made derogatory comments about a particular religious group or racial group then they would would face disciplinary action. This should be no different.

"How can cyclists have confidence in police, when they are calling cyclists to cockroaches?

"We have always felt that there was contempt for cyclists among police ... but this goes to show that it does really exist and that it's wider than we first thought."

Commissioner Ian Stewart took to Twitter to address the concerns of cyclists who brought the incident to his attention. He said: "All road users need 2 take their role in road safety seriously.

"Work with us to enhance the relationship with all cyclists & road users. Safer roads 4 all is our goal ...

"We try hard every day but we are not perfect. Our intent is continuous improvement!"

A spokesman for Police Minister Jack Dempsey said: "The Queensland Police Service has a social media code of conduct, which we expect officers to adhere to and if there are any complaints they will be fully investigated," the spokesman said.

The policy states: "At all times when using online social media platforms, QPS employees must take responsibility to ensure their personal opinions and/or views are not at risk of being misconstrued or misinterpreted as QPS policy or otherwise sanctioned by the QPS.

"It is recommended QPS members do not identify their employment status online or comment on Service policy, however, the QPS requires employees to act responsibly and be fully cognisant of the personal and professional risks involved in doing so."

1
Near Miss of the Day 704: Two abreast group close passed by impatient driver who almost hits front rider
2
Highway Code changes: what is the Dutch Reach and will drivers be fined £1,000 if they don't use it?
3
Here's how to make a DIY VO2 max tester for use with Zwift and Strava for only £130
4
Highway Code changes: Daily Mail publishes "error-strewn" Richard Littlejohn column attacking cyclists
5
Near Miss of the Day 703: Very close pass at pinch point (video includes swearing)
6
Press misrepresents Highway Code changes – just days before they come into force
7
Expect carnage and more danger...Mr Loophole rants about Highway Code changes to talkRadio's Mike Graham
8
Egan Bernal in intensive care following successful surgery on training crash injuries