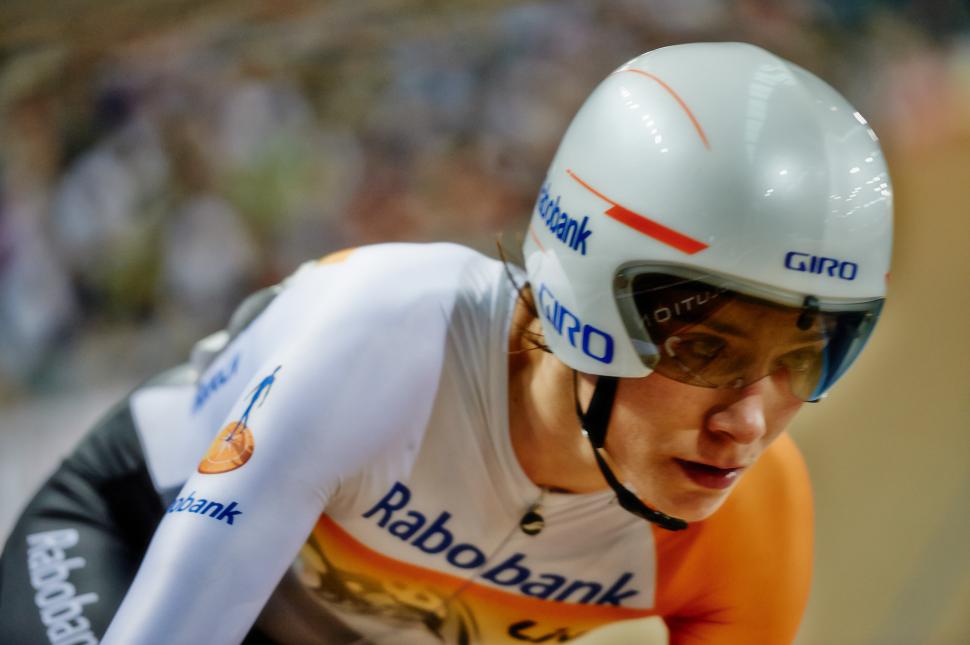 Interview: Marianne Vos - The Dutch rider with a strong claim on being the world's best cyclist

Women's cycling is going in the right direction, says star who enjoys dominating her rivals‏...
by Simon_MacMichael

Maybe it’s the helmets, maybe it’s the omnipresent sunglasses. But when you meet in person a professional cyclist you’ve seen countless times on TV, now stripped of those accessories, they always look different up close. And when that cyclist is Marianne Vos, for many people the best bike rider, male or female, on the planet, you can’t help but notice the eyes.

Sea green in colour, piercing and alert, you’re reminded of a cat – and as her status as a multiple world and Olympic champion in a variety of disciplines demonstrates, once she senses her prey in the form of rival riders, the Dutch woman will toy with them, then pounce for the kill.

That instinct has brought Vos two Olympic gold medals on the track and the road, plus multiple rainbow jerseys in those disciplines and in cyclo-cross, perhaps her forte, as well as three national mountain biking titles. No-one else comes close to that versatility or consistency, and she’s still only 27.

She returned to the track last weekend at the opening round of the Revolution Series in London where she raced the Omnium, won by local favourite Laura Trott, who had taken Olympic gold in that event at the same venue during London 2012.

We caught up with her after the final round, the points race, where Trott made it a perfect six wins out of six events to seal victory on the night. Vos finished third, with Katie Archibald claiming second place.

Given her high-profile wins across a range of disciplines, we asked Vos, back in the city where two years ago she became Olympic road champion, which is her favourite?

“I can’t really choose between the disciplines,” she said. Admitting she enjoys dominating her rivals, Vos acknowledged, “it’s sometimes difficult to keep the right balance but that’s the reason why I often choose one [discipline] for the season.

In 2008, Vos won Olympic gold on the track in the points race, but since then, her focus has changed.

“After Beijing I chose to focus more on road and cyclo-cross and that’s actually what I’m still doing,” she said, adding that this weekend’s meet in London would be her last time competing on the track this winter.

The Rabobank-Liv rider plans to defend her world cyclo-cross title – she’s won the rainbow jersey seven times in the event – in Tábor in the Czech Republic at the end of January, before turning her attention to the UCI Women Road World Cup.

A post cylo-cross-season break this year meant Vos was unable to challenge eventual winner, Britain’s Lizzie Armitstead, in that season-long event, but she plans to hit it earlier next year.

The road did produce perhaps the high point of the Dutch rider’s 2014 season, though, sprinting on the Champs-Elysées to win the inaugural edition of La Course by Le Tour, the women’s event that Tour de France organisers ASO launched in response to pressure from Vos and other leading women riders.

Last week, it was confirmed that the race will be held again next July, and Vuelta organisers Unipublic – owned by ASO – are holding a similar event in Madrid to coincide with the end of the Spanish Grand Tour.

We ask Vos if she believes, given those developments, women’s cycling is heading in the right direction?

“Yeah, definitely,” she says. “These events coming up now, that’s great for women’s cycling. Of course, ASO set an example with La Course, other organisations have seen that and want to follow and keep up with them, that’s fantastic to see.

“The Vuelta is definitely going on in 2015, the same as [the Tour of] California, a new race in Philadelphia, but there are also existing races, we have Flanders, Flèche Wallonne, so that’s very good.

“The fans we see more and more with women’s cycling, it’s getting more attention, and that hopefully is an inspiration for all the girls, for other women to get on the bike and also raise the level for professionals.”

One of the co-founders of Le Tour Entier is British rider Emma Pooley, who has now retired from the sport to focus on triathlons and long-distance running, and who said earlier this year that the prize money on offer there was much more than she has ever made from cycling.

Vos doubts that Pooley’s decision to leave the sport was motivated by finances, however. “I don’t think she has chosen it for prize money, she’s followed her heart and she’s definitely a complete athlete,” she said.

“She wanted something else and for her that’s triathlon or duathlon. She retired for one month and then she was world champion in the duathlon. So I think she’s an incredible athlete.”

While Pooley and Armitstead, among others, have called for more money to come into the sport and for Sky to fund a women’s team, Vos – perhaps surprisingly – does not see finance as the biggest issue.

“Women’s cycling is growing, but it’s not all about money,” she said. “It’s definitely about the passion for the sport and I hope this passion will be enough to grow the sport, and not the money.” It’s a sport that Vos believes is still developing. When we ask her for her thoughts on Armitstead’s appeal last week for a minimum wage to be introduced, as men get, Vos echoes the words of the woman she beat to Olympic gold in London two years ago, saying it’s a “chicken-and-egg” situation.

“Nobody really knows the answer but what I do know is we are growing step by step and we don’t need to rush,” she continues.

“If you take too big steps, then it harms the sport. A minimum wage, of course would be nice and I know some teams are definitely ready for it, but not all of them, and the UCI is going to make the right decisions on when it will happen.” Vos has to head off to a signing session on the main concourse of the velodrome with her rival this weekend, Trott, where the pair will be mobbed by fans young and old.

But there is one more thing we need to ask the woman who has won two Olympic gold medals and a dozen in world championships, as well as some of the biggest one-day and stage races in her sport.

That question is, how does it feel to be the person many think is the world’s best cyclist? It’s one that brings out a laugh, as well as a flash in those eyes.

“Well, it’s a fantastic compliment, I get to hear it sometimes and it’s something you don’t really realise, and maybe that’s good,” she replies.

“Maybe I don’t need to realise it, and just need to keep working hard and focus on the next goals.

“Of course I’ll look back sometimes and I’m really happy with what I’ve achieved but on the other hand it’s mostly dedication and passion and that’s why I try to look forward and not look back too much.

“But of course it’s a great honour if people come to you and say you’re an inspiration,” she concludes.